The economy grew by only 2% in the third quarter of 2021, far below the 7% rate it was earlier expected to grow, as Biden’s $1.9 trillion “American Rescue Plan” diverted money away from productive investments, and made it harder to fill jobs. The economy “decelerated to an 2% annualized rate in the third quarter,” reports Market Watch. “This is the slowest growth rate since the 2020 recession.”

“The economy grew at a disappointing 2% in” the third quarter of 2021, notes Ben Shapiro; “the media blamed the delta variant” of the coronavirus. But “if that were true, we should have seen widespread spikes in unemployment in the red states that suffered from the spike the most, and serious economic growth in unaffected states. Nope.” “Instead, the red states continue to do just fine economically, while the blue states continue to stagnate.” Republican Nebraska, New York, and Idaho have unemployment rates below 3%; Democratic New York, New Jersey, and California have unemployment rates over 7%.

As Capitol Economics notes, this quarterly economic report “is a big disappointment given that the consensus expectation at the start of the quarter in July was for a 7.0% gain and even our own bearish 3.5% forecast proved to be too optimistic.'”

Biden’s $1.9 trillion in new spending was financed by borrowing money, driving up the federal budget deficit. But “the existence of the debt saps the rest of the economy,” says the University of Pennsylvania’s Efraim Berkovich. “When the government is running budget deficits, the money that could have gone to productive investment is redirected.…You’re taking away from the capital that we need to grow our economy in the future.”

Biden should have known his “American Rescue Plan” would shrink the economy. As Reason Magazine’s Peter Suderman notes, “Biden’s recovery plan paid people not to work. So it is hardly surprising that they are now not working. And depending on how long this persists, some of those jobs may simply not come back, leaving employers, consumers, and workers worse off.” In passing Biden’s plan, Congress ignored a labor economist, who “warned in congressional testimony” that Biden’s plan would result in unemployed workers remaining unemployed. “Many major components of the plan,” he said, “are either unnecessary or would hold the recovery back.”

Biden’s $1.9 trillion “American Rescue Plan” wasn’t needed for our economy, which was growing rapidly when it passed. Instead, it contained provisions that will reduce economic growth in the future by encouraging people to work less and earn less money. It took away some people’s $1,400 stimulus payments if they worked harder and earned a little bit more money. It gutted welfare reform, giving people welfare even when they could work. And it gave some people more money in unemployment benefits than they would get by working. It also rewarded many federal employees for not working, by paying them $1,400 per week to stay home if their kids were out of school.

Many people who got money from the Biden plan didn’t need such payments, since they were already being supported by the taxpayers. For example, prison inmates got $1,400 stimulus payments under the COVID relief bill. Senator Bill Cassidy objected to that, saying prisoners have “their living and medical expenses paid for by the taxpayer,” “don’t pay taxes,” and “can’t be unemployed.” Senator Tom Cotton noted that “Dylann Roof murdered nine people,” yet he got “a $1,400 stimulus check as part of the Democrats’ ‘COVID relief’ bill.” 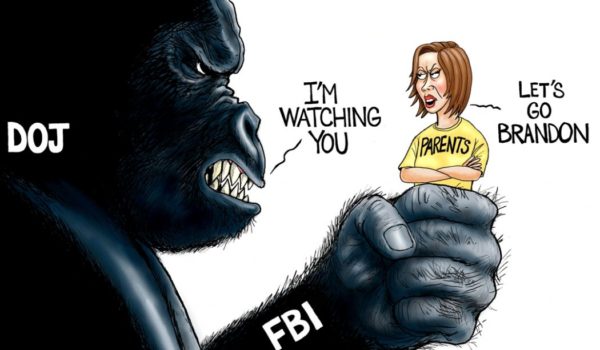 Cartoon of the Day: Bark of the Beast
Next Post
FEC asked to investigate McAuliffe over illegal foreign donations