Recently, I asked a Trump-supporting friend from Georgia if he thought our nation was doomed with President Biden at the helm. Using a Titanic analogy, he answered, “We’ve already hit the iceberg, and now we’re running for the lifeboats.” Then he added, “I would take Trump back in office five times over Biden,” but admitted, “I personally don’t like Trump and prefer he step aside for Florida Gov. Ron DeSantis.”

Based on my friend’s demographic profile, I consider him a one-person focus group reacting to layers of crises. And his pessimism is in line with new polling. The president’s 44 percent job approval rating average indicates more than just that Trump supporters are losing hope in Biden’s ability to right the ship of state.

Nonetheless, for anti-Trump and independent voters souring on Biden, remember the pendulum-swinging reason you voted for him: He was not Donald Trump. And that was before January’s violent attack and second impeachment on Capitol Hill, which made “boring Biden” even more appreciated after all the authoritative strong-man drama.

However, Biden following Trump into the White House is emblematic of a pervasive, overarching national problem that rarely makes headlines yet impacts them all — the United States has a presidential leadership crisis.

When voters see two names at the top of the presidential ticket every four years, they shake their heads and ask: “Why can’t we do better than these two?” Raise your hand if you can relate.

Unfortunately, due to what I call a “compounded pendulum effect,” our presidential leadership crisis is on a downward swinging spiral. Although the pendulum has always swung from one president to the next, the 24/7 media and internet-era has increased polarization and intensified severity.

For example, in January 2009, George W. Bush left office with a 29 percent job approval rating average. That helps explain why the inexperienced Barack Obama was elected amid fervor for hope and change.

Then Obama in 2016, plagued by a perception of weak leadership, backed the unlikable but experienced Hillary Clinton with her truthful but unstated campaign message — “it’s my turn to be president.” But her dreams were unexpectedly thwarted by a burger n’ fries eating “everyman” celebrity billionaire named Donald J. Trump. He was the political and intellectual polar opposite of both Clinton and Obama with his rally message of “Make America Great Again” and “build the wall!” on repeat play.

That brings us to the 2020 election in the uber-polarized Divided States of America. An era in which everyone only watches and reads news and information they agree with and share through their phones on social media. That climate propelled the COVID-pandemic-election pendulum to swing from Trump to an “adult” place-holder president whose go-to leadership line is “C’mon man.”

The Biden vs. Trump choice – among the worst “hold your nose” moments in American history – motivated a record turnout of 155 million voters.

Thus, nine months into his term, is anyone surprised that President Biden – who will celebrate his 79th birthday in November – is turning out to be among our weakest presidents? During his 36 years as a U.S. senator, followed by eight years as Barack Obama’s vice president, Biden was never a stand-out leader. And, today, if not for Rep. James Clyburn’s (D-S.C.) endorsement in the 2020 South Carolina presidential primary, Joe Biden would be painting with Hunter Biden at his Delaware beach house.

Looking ahead to 2024, we have the makings of potentially the greatest modern presidential leadership crisis at the most perilous time. Pay close attention to China’s aggressive military moves toward Taiwan. Chinese communist leaders have set their sights on taking back the island and controlling the world’s leading manufacturer of semiconductor chips. That means the U.S. economy could be brought to its knees since the American share of global chip manufacturing capacity has “fallen to 12 percent,” according to the Semiconductor Industry Association. It is only a matter of time until this Taiwan/China conflict comes to a head, and practically every item you touch and depend on is impacted.

Is there a U.S. leader now or on the horizon who could navigate our nation through such a global economic catastrophe? Names, please.

The very definition of a leadership crisis would be if the American people had to choose between Biden and Trump in 2024. Could the pendulum swing from Trump to Biden back to Trump? Hill pundits argue how Biden’s “train-wreck” could elect Trump 2.0  — resulting in authoritarian rule with no guardrails.

Could she win Biden’s second term if he were to step down? Can you imagine a Harris vs. Trump race? The winner would take our nation from leadership crisis to leadership apocalypse.

Now ask yourself two big-picture questions: Is America ungovernable and incapable of being led? How can anyone lead when half the population refuses to follow?

Our enemies know the answers.

Cross-Posted at The Hill and Substack 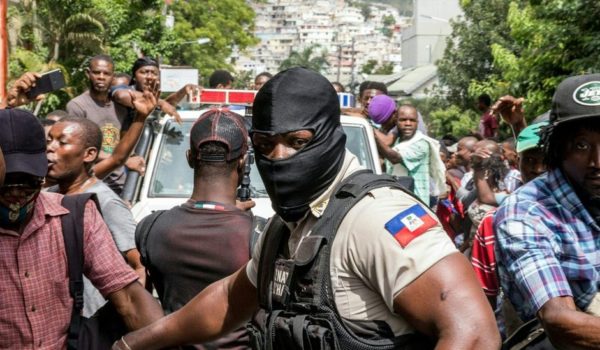