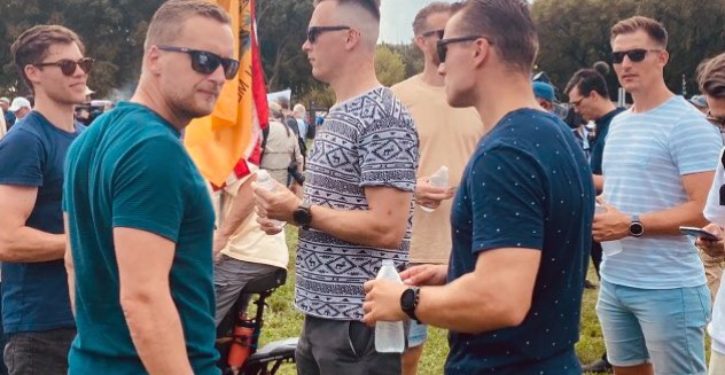 It seems word got out that the “Justice for J6 Protest” was really a set-up so Democrats and their media allies could continue pushing the narrative that all Trump supporters are traitors and insurrectionists who should be gunned down on sight. (RELATED: Eight months after Jan. 6, 60 protesters remain locked up)

A report at the Gateway Pundit suggested there were more police and media types than protesters at the event.

President Trump told supporters the Justice for J-6 rally was a set-up.

Populists and Trump supporters feared it would be another calamity where Antifa and unnamed FBI agents would infiltrate the crowd and trigger-happy Capitol Hill police officers would gun down young women.

So the turnout was sparse.

We all support the Jan. 6 political prisoners.  We just didn’t want to get set up by the government or shot by Capitol Police to prove it.

Folks, we got a more-journalists-than-protesters situation for now. Here’s A protester and the crowd listening to her talk. #J6rally pic.twitter.com/bGSZWJP7bl

So far, not a lot of rally attendees at this “Justice for J6” event on the Mall. 100 or less. pic.twitter.com/EoXs98WBvj

No doubt hoping to gun down innocent Trump supporters.  Maybe even a grandmother or two.

Still seems like more press than protesters. Less than one demonstrator per member of Congress as the scheduled event begins. pic.twitter.com/6HQjeXKeVA

Then there was this:

Was everyone at the J6 rally wearing government issued Ray Bans ?? pic.twitter.com/NcgudZ1yKV

These guys might as well have worn sandwich boards declaring themselves to be federal agents.

There is no doubt in my mind that Democrats were hoping for a huge turnout so they could justify blowing away a few Trump supporters. That didn’t happen, but Pelosi did get a fence put up around the Capitol. Can’t let those pesky American citizens have access to the halls of power now, can we?

“Now we’ll wait for some Democrats to try and portray today’s rally as another threat to the republic,” Twitchy said.

And you know they will, right along with their propagandists at MSNBC who were probably ready to celebrate the murder of a few hundred Trump supporters.

Time to start using the i-word in discussing Biden’s fate?
Next Post
FDA says it does not buy fetal tissue — any more