Schumer made his remarks on the Senate floor where he condemned Barrett’s confirmation, saying that his colleagues “may regret this for a lot longer than they think.”

“Generations yet unborn will suffer the consequences of this nomination,” he continued, “as the globe gets warmer, as workers continue to fall behind, as unlimited dark money floods our politics, as reactionary state legislatures curtail a woman’s right to choose, gerrymandered districts and limit the rights of minorities to vote, my deepest, greatest, and most abiding sadness tonight is for the American people and what this nomination will mean for their lives, their freedoms, their fundamental rights.”

The senator concluded by predicting that this day would go down “as one of the darkest days in the 231-year history of the United States Senate.”

His comments on the unborn come amidst Democratic anxieties that Barrett’s confirmation will result in overturning Roe v. Wade. Liberal groups, Democrats and abortion advocates also predicted that appointing Brett Kavanaugh to the Supreme Court would result in dangerous limits on abortion access and other prominent political issues.

Cartoon of the Day: Circle of insanity
Next Post
Elizabeth Warren explains ‘why GOP fought so hard to steal SCOTUS seat’ 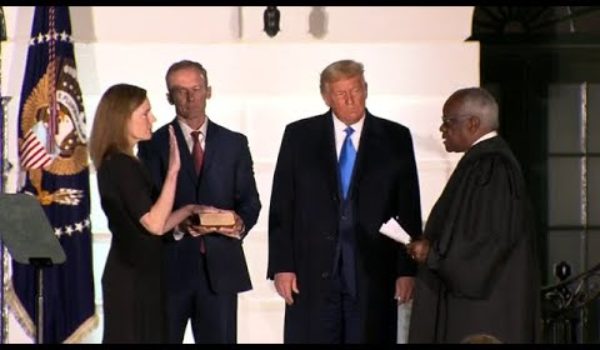