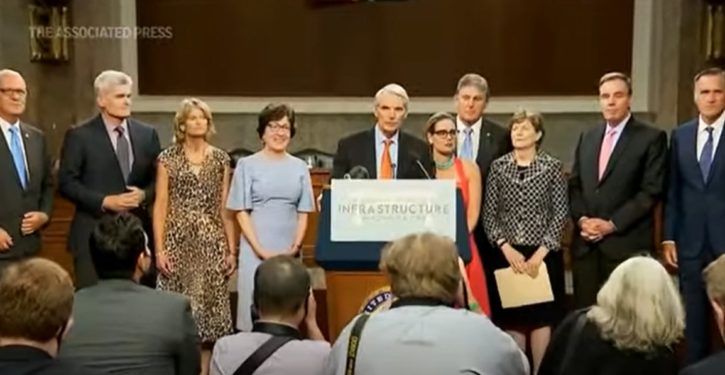 The Senate voted Wednesday for cloture on the bipartisan, “gang”-crafted $1 trillion infrastructure picture bill that contains the only real infrastructure spending in a Democrat-envisioned spree that’s expected to exceed $4 trillion.

Although the bipartisan bill itself isn’t finalized, according to Senator Tom Cotton (who spoke to Fox News on Thursday), it does have actual infrastructure improvements on offer.  CNN’s tally includes:  “$73 billion to rebuild the electric grid, $66 billion in passenger and freight rail, $65 billion to expand broadband Internet access, $55 billion for water infrastructure, $40 billion to fix bridges, $39 billion to modernize public transit like buses and $7.5 billion to create the first federal network of charging stations for electric vehicles.”

The list of 17 Republicans who voted for cloture is below.

Last week we discussed the overt intention of the Senate Democrats to use the bipartisan bill to enact a laundry list of Democratic spending proposals, including bribes to the states to vitiate the integrity of their voting systems.

The method for this will be to use “reconciliation” to alter the content and language of the bill, now that cloture has been invoked.  Cloture requires 60 votes, but once it has advanced the bill to floor debate, everything including the entire bill can be approved by a simple majority.  The Democrats don’t need another Republican vote to lard up the “bipartisan” bill and pass it.

President Biden already, on Thursday, mentioned turning DACA into a mass amnesty as a reconciliation measure for the infrastructure bill.  There will be others.

The words of Amy Klobuchar in last week’s article indicated that the Democrats don’t expect to be able to stuff the entire Democratic wish list – i.e., their separate $3.5 trillion ideological-spending marathon – into the bipartisan bill.

We’ll see how that goes.  But it’s quite possible that the 17 Republicans really have bought America a pig in a poke, as we further discussed in the earlier infrastructure article this week.

I didn’t go into it at the time, but one reason Trump is right about just saying No to infrastructure Trojan horses is that the Democrats are waging something bigger than a bill-passing campaign here.  Their $3.5 trillion bill, chock full of Green New Deal and other ideological programs, is so far-reaching and unnecessary, it’s clearly meant to commit the nation to a path of radical transformation there’s no going back from.

The Senate Republicans could have halted the momentum by simply preventing cloture on any infrastructure bill, especially just before the August break.  Instead, they’ve given a rocket boost to the Democrats’ vision for what can actually be accomplished.

The first $1 trillion-odd bill is in the Democrats’ pocket.  There’s no stopping it now.  And remember, President Biden vowed in June that he wouldn’t sign that bill without the larger, partisan bill to accompany it.

How to ram through the $3.5 trillion partisan behemoth?  If anything could motivate the Democrats to eliminate the filibuster – which they can do with a simple majority vote – it could be the quest for their “infrastructure” bill.

A cloture vote requiring a 60-vote majority is how the Senate breaks a filibuster, which otherwise can keep legislation from going to a full-Senate vote.  The usual filibuster practice now is to exercise a “silent” filibuster (rather than keeping an endless open session going with floor speeches) by ensuring cloture doesn’t get 60 votes.  That gives the minority some check on partisan excesses by a razor-thin majority.

As it stands, the only thing between America and rule by a 51-50 majority in the Senate is Joe Manchin and Kyrsten Sinema, who would have to stick by the rest of the 50 Democrats to end the 60-vote cloture requirement, or otherwise make filibustering infeasible.  So far they’ve been outliers.  But no unbearable pressure has been brought on them yet.  The brass ring wasn’t within reach until now.

Removing 60-vote cloture is a crossing of the Rubicon, to be sure.  But the atmosphere of political motivation in Washington has just such a character of recklessness to it today.  We’ve never been this close to the unthinkable.  That proximity comes from being so close to getting the radical-progressives’ agenda implemented.

A lot of things will change very quickly if the filibuster is eliminated.  For the first time in my life, it appears the odds on the filibuster surviving are about 50-50.

The Democrats could not have signaled more clearly up to now that they are ready to force through a radical agenda that most Americans never thought they were voting for.  The rampant chaos of the southern border situation is evidence of that.  Actually proposing things like court-packing and federally-mandated conditions for ballot-harvesting shows where the Democratic Party is in terms of internal brakes on excess.

This infrastructure vote was a major unforced error by the GOP.  We could get lucky.  But luck, like hope, is not a strategy.