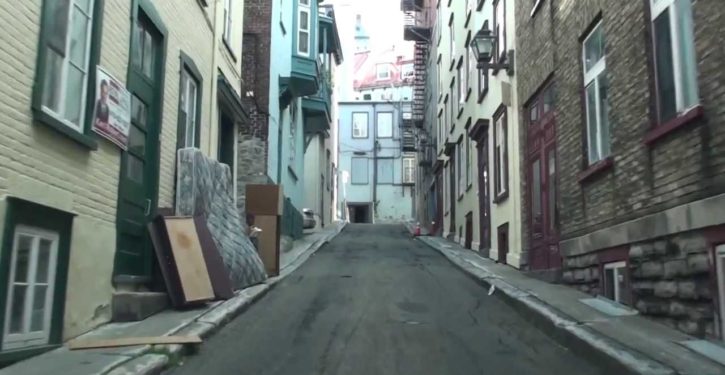 Over the years, the far Left has expanded dramatically the horizons of racism. In 2013, we were informed for example that peanut butter (with or without J) is racist. By 2016, the list was extended to include trees in national parks and the uniforms worn by park rangers. A year later the catalog had been broadened again, this time to include the lack of visibility of a total eclipse of the sun in many regions inhabited predominantly by blacks.

Now a Twitter user who goes by the name of Mary K. Anstruther has suggested another candidate for inclusion on the ever-expanding list. Her nominee? Streets, or at least the color of most streets. According to Anstruther’s (if that is her name) Twitter bio, she is a university professor. Where she “will not disclose … because of right wingers.” She also styles herself a “Twitter influencer” despite the fact she has only 1,157 followers.

So why are streets that are painted black racist? “Blacktivist” Anstruther explains in a recent tweet:

Streets are painted black because of racism.

It is so that Black people must internalize being driven on and stepped on.

Streets should be painted white for scientific and safety reasons, but racism doesn’t allow for that.

Remember that next time you look down & see a street.

She doesn’t weigh in on streets painted with the slogan “Black Lives Matter” in outsize letters, though presumably she approves of them because of the message.

What are some of the other gems Anstruther imparts to her students? Here’s a couple:

Every black man should aspire to be like George Floyd, a quintessential American icon on par with the founding fathers.

When I am elected to Congress, my first bill will be to make October 14th, George’s birthday, a National Holiday.

We shall honor his legacy.

Finally, there’s this, which will have many breathing a sigh of relief: