According to the TSA, an estimated 2.15 million Americans passed through airport screening checkpoints Thursday — this despite the threat of the “delta” variant of the COVID-19 virus now sweeping across the nation. Their actions are in direct defiance of a decree their fearless leader handed down in March. In a primetime address back then he said that if we all behaved — if we got our shots, wore our masks to bed, drank our milk, and brushed our teeth — we might, just might “be able to get together and have a cookout or a BBQ in our backyard” this coming Fourth of July. “That doesn’t mean large events with lots of people together,” he was hasty to add, “but it does mean small groups will be able to get together.”

And now you have all these fools throwing caution to the wind. They’re not alone in defying Joe Biden’s order. The Seattle Times explains:

… [O]n Sunday, a sea of 1,000 largely maskless people will flow onto the South Lawn of the White House for an Independence Day party that marks the first large-scale event hosted by Biden as president, a barbecue that will serve as a marker of sorts for an America returning to normal.

One might cut his nibs some slack by conceding that “things have changed” since his March except they’ve changed in many ways for the worse. According to the Centers for Disease Control and Prevention (CDC), the “delta” variant is now behind more than a quarter of U.S. infections, which are mainly among people who have not been fully vaccinated.

The White House, moreover, concedes that it has fallen short of Biden’s “goal of partially vaccinating 70 percent of American adults by Independence Day,”  though in the same breath it insists it has “’succeeded beyond our highest expectations’” in returning the nation to a pre-pandemic normal” — whatever that means.

In any event, expect today’s shindig on the South Lawn (aka “super spreader” event) to proceed as planned.

Independence Day 2021
Next Post
Cartoon of the Day: Wrong direction 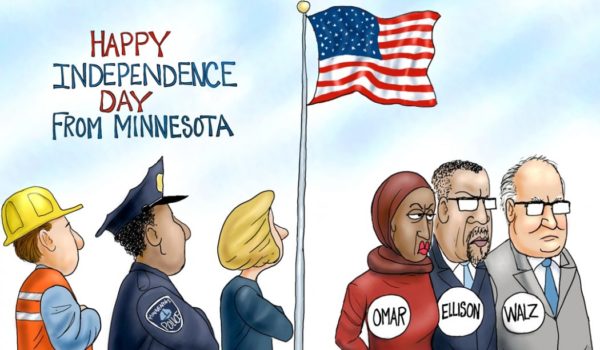