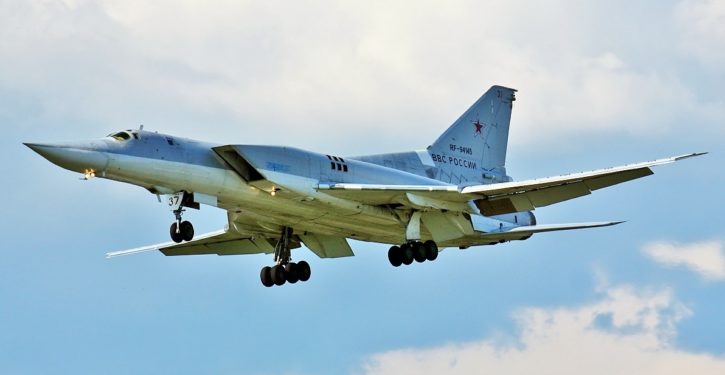 On Friday, after the series of untoward events in the Black Sea over the past week, Russia began a maritime exercise in the Eastern Mediterranean featuring – according to Russian reporting – “several” warships, two submarines, Tu-22M3 Backfire bombers (deployed to Syria since 24 May; see also here), and MiG-31BM Foxhound fighters said (by Russia) to be armed with Kinzhal hypersonic air-launched ballistic missiles, with a range of up to 1,000 nautical miles (1,250 statute miles).

Both the modified MiG-31 and the Backfires can deliver nuclear-capable missiles.  (There is no indication that the aircraft are currently equipped with nuclear weapons.)

The base of operations for the aircraft is Hmeimim airfield on Syria’s coast, from which Russia has been operating fixed-wing combat aircraft since 2015.

And although certified Cold Warriors will remember a time when Russian operations in Syria weren’t much to get excited about, that’s no longer the case.

The reason is simple.  Russia can now put combat aircraft, including heavy bombers, in Syria and hold the Eastern Med at risk without having to run a NATO gauntlet to get there.

That’s something the former Soviet Union could never do during the Cold War.

I wrote about this back in 2016, when Russia had demonstrated air access through Iran on multiple occasions (see here and here).  Russia prying open the path to the Med through Iran effectively ended the Truman Doctrine.  The Russian push through Iran and Iraq into Syria came shortly after the 2014 campaign to begin reclaiming the eastern portion of Ukraine, and represented an obvious, incipient pincer around the NATO bridge across the Bosphorus.

The dynamics of this century are, of course, the ones of current and overriding interest.  But it’s essential to understand that in all history, Russia has never had the access she can now make use of through the Iran-Iraq route to the Eastern Med.  Yet the vision for such access dates to some 300 years go, and Peter the Great.  Stalin tried to reify it at the end of World War II, which is why we had a Truman Doctrine for nearly 70 years.  Russia’s progress has taken a very long time.

That’s the perspective required to understand that Vladimir Putin has something bigger in mind than supporting Assad, or merely having a base on the Mediterranean.  He is growing a basis for geographic leverage, and eventual domination of a vital strategic chokepoint, that he has no intention of giving up.  That applies to both sides of the Black Sea littoral and the Bosphorus and Sea of Marmara.

During the Cold War, Russia’s airways to the Eastern Med were all confoundedly inconvenient.  Few Soviet aircraft deployed to Syria for operations:  some Tu-16 Badger jets (bomber variants and reconnaissance aircraft) and Il-38 May prop-wagons (maritime patrol aircraft), in the 1970s and 1980s.

The shortest potential route for bombers, through Ukraine, Romania, Yugoslavia, and Albania, could take advantage of heavy bomber bases in Ukraine* and friendly air space in Southeastern Europe, but still ran into NATO air defenses in Greece and the NATO ships that patrolled the Eastern Med.  For Soviet power projection purposes, flying through Turkish air space was of course not an option, and during this period (1970s-80s) Iran and Iraq never lined up at the same time to offer a path to Syria from the East.

A longer path might also have been used across the Warsaw Pact nations of Northern Europe into the North Sea and points south and west.  As described in docent material for the Poltava, Ukraine bomber museum (see footnote), this route was an operationalized one, executed during major Warsaw Pact exercises.

The long route from the Northern Fleet operating areas reflects the airway used by IL-38 May reconnaissance aircraft to deploy to Syria.  At various times, as the fortunes of Soviet foreign outreach waxed and waned, the Mays might be able to make stops en route in Algeria, Libya, and Malta.

But, again, all of these paths went through a thicket of NATO air defenses.  (Any option of flying combat aircraft through non-Warsaw Pact air space would have been vigorously opposed by NATO, as, for example, was the reported intention of the Soviet Union to deploy airborne support to Egypt in the 1973 war.  A separate treatment then-Lieutenant Colonel Oliver North did of this topic in 1985, when the Soviets were working a hostage situation in Lebanon, makes useful reading.)

It wasn’t until 2015 that post-Soviet Russia was able to put combat air assets in Syria from the East.  In theory, some NATO allies with a presence in Iraq could still have a shot at Russian aircraft during transit.  But Iraq, the host nation, has a veto over whether such shots could be taken.

Over in the Pacific, Russia has been holding a national naval exercise off Hawaii, further into the Pacific than she has ever ventured for such an operation.  It’s important to recognize that this isn’t about where the Russian navy has been before; it’s about what the Russian or former-Soviet navy has ever done before.

Friendly visits to the U.S. and Canada during the last 30 years are not the same thing, nor were Soviet submarine patrols (e.g., by cruise missile-equipped subs) during the Cold War, or the surveillance of the Hawaiian operating areas by lone intelligence collection ships (relatively routine over the last 15 years, although far from continuous).

In 2021, Russia is exercising combined-force combat disciplines of the kind she would use in a conflict with the United States.  Yes, she’s doing it with old ships and submarines.  But that, she has never done in the middle of the Pacific, within tactical weapons range of Hawaii, until now.

And now, for the first time ever, Russia has heavy bombers menacing NATO out of Syria, along with modified fighters armed with one of her newest nuclear-capable missiles, all without prior vulnerability to NATO interdiction on the route to the theater.

Russia lost Ukraine in the breakup in 1991-92, and has made only partial progress regaining control of territory there.  Yugoslavia is gone.  Several former-Yugoslav nations, along with Romania, Bulgaria, and Albania, are NATO allies today.  The path through Iran and Iraq depends on Russian relations with Iran and Iraq.  But the latter path, the one Russia never had before, is beyond the ready combat reach of NATO.  We’re in a new century now.

* The history of the bases in Ukraine is very interesting in its own right.  The U.S. used Poltava in Ukraine during World War II to supply the Eastern Front – after the base was retaken from the Germans.  The Soviets refurbished it as a major base after the war, and in the NATO/Warsaw Pact years it was an anchor of the USSR’s Western theater of operations.  Poltava hosted the three types of Soviet strategic bombers at the end of the Cold War, the Backfire and Blackjack having arrived near the very end, in the 1980s.  In the breakup of the Soviet Union, Ukraine ended up with dozens of the heavy bombers, which were retired and dismantled along with other strategic nuclear assets under the terms of a defense guarantee from the United States negotiated in the mid-1990s.  Today there is a strategic bomber museum in Poltava with displays of the aircraft housed at the air base during the Cold War.  It’s the only museum of its kind, with a copy of each of the bombers as well as other former-Soviet aircraft.  Put it on your bucket list. 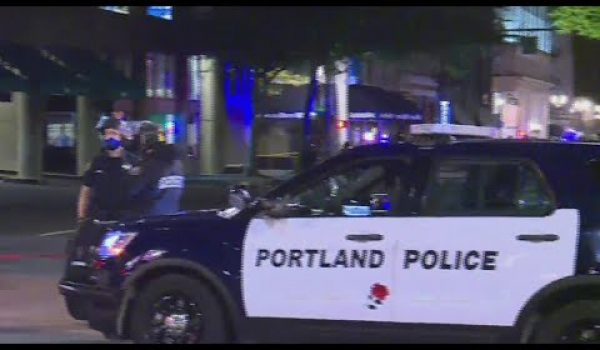 Police reassure Portland mobs: Only fatality in police-involved shooting was white male
Next Post
Engineer warned of ‘major structural damage’ at Florida condo as early as 2018 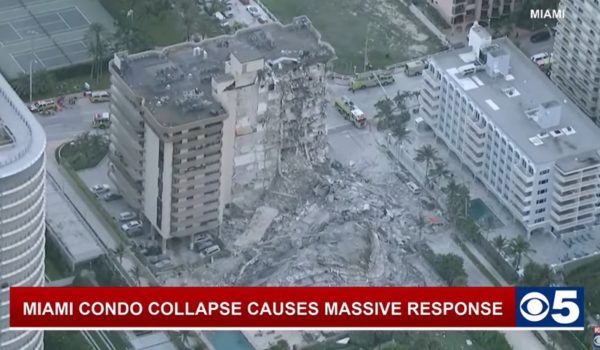