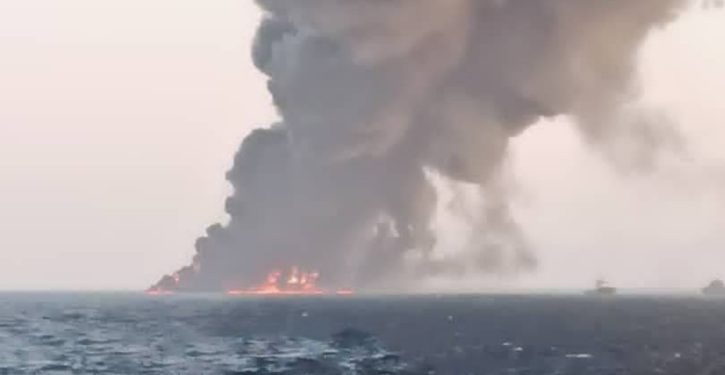 Though the Kharg‘s disaster would have nothing to do with the potential deployment of a two-warship Iranian task force to Venezuela, it is — as always — interesting that the replenishment ship sank within days of the oceangoing task force being reported in Western media.

The interest lies not so much in a direct operational connection as in the overall profile of evidence that Iran’s efforts to probe and jab at the stability of the Middle East are ramping up.  Instead of being ignored or failing to make the news, Iran’s activities — and possibly the reaction to them — are inching onto the front page.  In less than a week, there’s been dramatic news about Iranian operations that have the potential to relate to, and draw direct reactions from, the United States and Israel.

Citing Iranian official news sources, the Washington Post reports that the fleet oiler Kharg (pennant 431), after catching fire in the 2:00 AM hour (Iranian local time), sank on Wednesday in the Gulf of Oman, apparently near Jask.

A time when the ship sank is not given by WaPo, but it’s still Wednesday afternoon in Iran, and the fire would have started about 10 hours ago (as of this writing, at approximately 4:30 AM on the U.S. East coast.  Update: now about 7:30 AM Eastern as this goes to post).  So the ship sank relatively quickly.

?? Footage has emerged of a fire on the Iranian ship Kharg#Iran pic.twitter.com/2UE4swjdfo

That pretty much indicates the fire was not the cause of the ship’s sinking (which was very unlikely in any case).  To sink that quickly, the hull must have suffered a significant breach from a kinetic source.  A mine is a possibility, but given the high probability that the breach was well below the water line, if it resulted in Kharg sinking so quickly, I wouldn’t rule out a torpedo.

These are possibilities, by no means proven at this point.  They should be taken as initial analysis.  We may or may not learn more reliable details about this event. The location off Jask is noteworthy, however, and it appears from this photo, taken from shore, that the Kharg was close to shore at the time the fire was pumping smoke into the air.  This image was taken in daylight, so it was at least 4-5 hours after the fire reportedly broke out.

Efforts to contain the fire onboard IRIS Kharg (Iranian Navy modified Ol-class fleet replenishment oiler) has failed and the largest IRIN support vessel after IRINS Makran is now sunk off the coast of Jask.
Pic thanks to @seven777sevennn. pic.twitter.com/6mWzg61ShJ

WaPo refers to imagery from Planet Labs, but I haven’t seen that imagery posted online yet.  In any case, as WaPo reports, the ship was observed off Jask by Planet Labs analysts on Tuesday, and the proximity to the port during the fire suggests Kharg may have made a stop there.

Aurora Intel has this image of the smoke plume giving a good indication of where the ship was in the 0600Z hour (nearly 11:00 AM in Iran, currently offset+4:30 from GMT).

And The Intel Lab shows this sequence in a GIF:

Jask is a bit of an odd place to go: as the images below indicate, it has a series of naval piers where fast boats are kept, including a slightly larger naval facility next to the small commercial port where two or three missile patrol boats are based.  But Jask is a sparsely-furnished, low-activity installation.

That was potentially what made it suitable for Kharg to pull into.  Iran is boasting this week of the intention to rearm Hamas after the recent all-out attack on Israel, which drew a devastating response from the IDF.  Hamas openly affirms expecting this support from Iran.  Kharg has been implicated before in running arms to Syria, Hezbollah, and ultimately Hamas, as analyst Lenny Ben-David notes (see his article at the JCPA site linked in the tweet):

This is big. The Kharg is a large Iranian Navy supply ship (fmr Royal British Navy).
I've followed it for yrs as it sailed to Sudan & Syria probably to unload supplies and weapons for Hizbullah and Hamas.https://t.co/KEmKXZ6eS9

If Iran wanted to load Kharg with politically inflammatory cargo, and knows perfectly well how closely Bandar Abbas is watched by Western intelligence agencies, loading her at Jask may have seemed like a clever idea.  Observe the ease of access to Jask and the low traffic, making for a quick in-and-out.  Any of the piers could conceivably be used, although staging the cargo ashore would probably be the simplest at the main naval facility/commercial port.   (Note: it’s highly doubtful Kharg would have been used to transport arms all the way to Lebanon or Syria, even under some made-up pretext.  Much more likely: an insanely convoluted series of transfers in foreign ports, with Kharg‘s role being to move the arms out of Iran on the first leg.  See this remarkable tale of an attempt between December 2020 and February 2021 to ship out a cargo of Iranian oil — which eventually was impounded and offloaded in the U.S.)

Reports from Iran have referred to Kharg participating in an exercise, but contextual indicators appear to be lacking for that claim.  An exercise with fast boats from Jask, and perhaps a missile boat, makes little sense, even aside from the minimal amount of information available at this point.

Again, there may or may not be further useful information from Iran.  If someone sank Kharg using a naval weapon, we are even more unlikely to hear from that party.  Kharg has made something of a career in recent years of pulling into regional ports where she probably discharged arms cargo bound for Syria and/or Lebanon — an especially pernicious pattern given that Iran would be taking advantage of the naval ship’s sovereign immunity to perform the task.  So with Kharg, Iran has lost not only her high-value fleet oiler but a key method of foiling interdiction on the high seas by U.S. or other forces enforcing arms proliferation sanctions on Iran.