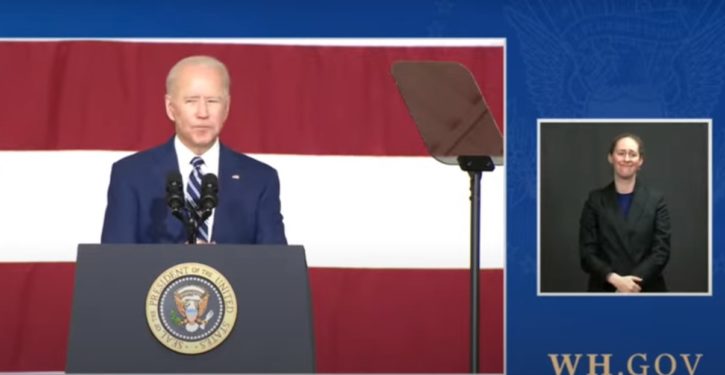 ASL interpreter speaks for all of us in awkward moment of Biden Memorial Day 2021 speech. White House video

Over the years, Joe Biden has made a name for himself as something of a hands-on connoisseur of – well, of other people’s charms.  Although his interest has seemed to be directed mostly toward young girls, he’s been in hands-on mode with grown women, boys, and infants as well.

Sometimes, circumstance dictates that his distinguishing notice be confined to making sprightly personal comments about those who wander at a distance into his view.

The president was in Hampton, Virginia at Joint Base Langley-Eustis on Friday for a Memorial Day commemoration with Governor Ralph Northam – whom Biden urged to resign his office in 2019, when an old yearbook photo surfaced in which Northam was probably the individual in blackface (but might possibly have been the one in the Klan hood).

Northam terms out as governor in less than a year, so his tenure as Governor Blackface will no doubt end without further remonstrance on that point.  Biden was able to focus on America’s Memorial Day observance.

The Biden speech didn’t go off without its measure of forgetfulness.  At one point, he truncated an iconic quote from the Declaration of Independence into “that all men are created equal, endowed by their Creator with certain inalienable rights, including life, liberty, etc.”

(The passage actually reads “that all men are created equal, that they are endowed by their Creator with certain unalienable Rights, that among these are Life, Liberty and the pursuit of Happiness.”)

In this case, Biden managed to sail through the garbled quote, projecting bold if strangely-paced zeal.  The full speech is here, with the event video starting at 50:30.

But what has social media buzzing is this peculiar passage:

Joe Biden looks at a little girl in the audience, the daughter of a veteran, and says "I love those barrettes in your hair. Man I’ll tell you what, look at her she looks like she's 19 years old sitting there like a little lady with her legs crossed." pic.twitter.com/DbH8ihG2Mj

“I love those barrettes in your hair,” said the president, addressing the young girl. “Man I’ll tell you what, look at her, she looks like she’s 19 years old sitting there like a little lady with her legs crossed.”

It’s hard to imagine a Republican keeping his political career after making such a comment, in any venue.  Republicans and Democrats alike would decry him as a creepy old man treating a girl like an object to be stared at and talked about for her appearance.

But Biden will presumably get a pass from Democrats and the mainstream media (the latter being unlikely to even mention that part of the speech).

Twitter replies weighed in with a gallery of Biden’s well-known previous encounters.

Nothing to see here folks just the 46th president of the United States pic.twitter.com/WbcuNFXxPX

Readers can decide for themselves what’s going on with this pattern.  All but the most diehard apologists usually tend to find it … odd.

But Biden has survived even odder incidents like recounting his (probably apocryphal) interaction with the gangsta “Corn Pop,” as well as another interlude from his lifeguarding days in which black children at a community pool allegedly stroked his hairy legs.  Those are the stories a Republican just can’t live down.  But Joe Biden soldiers on, and now has an ASL interpreter to make sure the hearing impaired can get a load of his barrette and crossed-leg-sitting appreciations, even if it appears to nauseate her just a bit to have to do it.