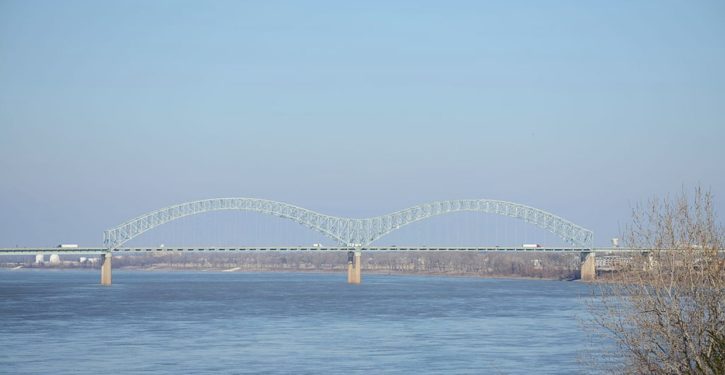 Hard on the heels of the Colonial Pipeline outage (which reportedly ended on Wednesday with service being restored), the Hernando de Soto Bridge on I-40, which spans the Mississippi River west of Memphis, was just taken out of service on an emergency basis due to a cracked beam in an “M” span.

The fracture is close to the middle of the steel “M” span, TDOT said. Three plates in a two-foot-wide steel beam had separated by a fraction of an inch and a fourth plate had a crack. The damage appeared to be fatigue-related, TDOT officials said.

There’s no formal estimate for repair time yet, but authorities spoke on Wednesday in terms of months.  The Coast Guard has also halted vessels in the river for the time being, although that restriction is likely to be lifted fairly quickly.

This is no small thing (anyone who’s ever driven across the bridge can imagine why).  I-40 is a heavily trafficked East-West economic artery, as important to the entire United States as to the city of Memphis.  Travel for many motor-vehicle users of I-40 can be rerouted somewhat readily, although with significant inconvenience, over bridges within 100 miles north and south of the I-40 bridge.  (See here for a list of crossing points for the Lower Mississippi.)  But commercial transport will be significantly interrupted.

Memphis is a major freight rail hub and the nation’s fourth-largest inland port.  Some freight can be rerouted from the port and railway transshipment yards via relatively convenient transport modes to its destination.  But for the tremendous amount of freight that normally gets moved onward via trucking carriers, making the switch to bypass I-40 across the Mississippi will be a disruptive process, and initially pretty time-consuming.

Today TDOT officials held a press event to talk about the I-40 Hernando DeSoto Bridge closure. The inspection is still underway, and could take a couple weeks to complete. A timeline will be shared as soon as we have one. Continue to use alternate routes. pic.twitter.com/Zfz4izuyED

Trucks will have to use different routes to get in and out of Memphis.  Losing the I-40 bridge is bound to back up traffic at the nearest bridges – and of course not all of them can be used by the big rigs.  Rail freight crosses the Mississippi on bridges that are still open, but there will be a limit to how much can simply be shifted to cross the river that way.

The bridge outage will give Memphis a wallop.  Businesses that rely on serving I-40 traffic will take much of the hit.  But the businesses that cater to transportation and warehousing will take it as well, with some logistics planners probably choosing to bypass Memphis in favor of other hubs while the bridge is out.

All of these consequences are pretty obvious, and local and national authorities have been warning of them in the hours since the emergency shutdown was ordered.

There’s one other consequence it’s not too soon to think of, as weird things start to go wrong with the U.S. national infrastructure.  Readers can decide for themselves why these things are happening.  It seems prudent to consider the likelihood that we’ll see more of them in the coming days.

The consequence is for national defense.  It’s something the public hasn’t had to give much thought to in the last few decades.  But the federal road network in the United States has always had the dual purpose of serving military and civilian-commercial requirements.  And the Mississippi River is a major terrain feature that it takes planning and preparation to span, if we need to move big weapon systems and other gear around inside the country.

The map below shows Memphis as a hub in the Strategic Highways Network (STRAHNET) and the Interstate Highway system (background here), with I-40 and the north-south artery I-55 intersecting there on the east bank of the river.  U.S. highways in the STRAHNET approach Memphis through Mississippi, Louisiana, and Arkansas from points around the compass rose.  Memphis is a major hub, like Birmingham, Dallas-Fort Worth, and Kansas City, serving Army bases like Fort Benning, Fort Hood, Fort Sill, and Fort Riley.

(An updated version reflecting fewer U.S. highways is posted here.  I’ve include both so you can get a sense of how infrastructure factors evolve over time.  Some changes are probably due to the state of the roads and bridges involved.)

Right now, the military could plan some movements to shift to rail where equipment and cargo might otherwise have crossed the Mississippi on the Hernando de Soto Bridge.  Depending on the materiel to be moved and the military load classification of roadway bridges, military movements could also shift to other roadways.

But for both defense and economic purposes, the stakes have now gone up for the additive disruption of taking out a railway bridge near Memphis (e.g., the Harahan or Frisco Bridge; see link above).  The I-40 bridge is a very big one to lose.

In extremis, the Army has combat bridging capabilities, to be sure.  But their best use doesn’t lie in moving big hunks of metal and rubber around inside the U.S., just to get across the Mississippi. I imagine we’d route convoys hundreds of miles out of their way to use other existing bridges, or head to ports with them and move the materiel by ship, rather than use a combat capability for logistics if we don’t absolutely have to.  Timelines are what would suffer.  (A list of crossings for the Upper Mississippi is here.  Many of them would not be suitable for use; the locations give a flavor of the inconvenience of having to detour that far, if the primary route for planning is on the Lower Mississippi.)

It’s far too soon to panic over the potential problems in a military transport scenario.  But it’s not too soon to be aware of them.  Planners in Beijing and Moscow study our critical infrastructure much more closely than the American public does.  And however the fracture in the I-40 bridge developed, they are acutely aware of what could now be achieved by taking down another bridge, or some other critical node in the infrastructure, whether for commercial or military purposes.  Slowing us down could in many cases get a job done as effectively as stopping us altogether with a logistics obstacle – especially if a major oil pipeline has been taken down at the same time.

I got the Johnson & Johnson vaccine for COVID-19. It was perfectly safe
Next Post
Trump likens Biden to Carter, citing gas crisis and Israel-Palestinian conflict