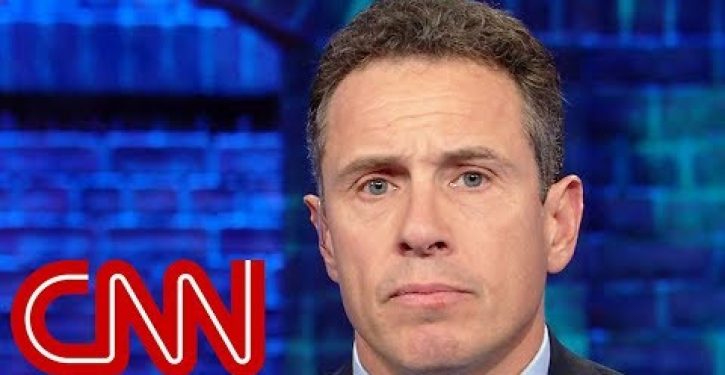 “George Floyd, Daunte Wright — I wonder if you’ll remember their names six months from today because there’ll be replaced by so many others.”

That was CNN anchor Chris Cuomo sounding off in an impassioned and provocative spiel on Friday about the latest casualty in the lopsided battle between police armed to the hilt and innocent blacks. His modest proposal? Let one or two white kids get gunned down, and watch change happen.

No, he didn’t actually suggest a sacrificial lamb. But he came close:

He stopped short of adding his own four children, ages 10 to 17, to the roster of potential casualties, but have doing so would have led him into a thought maze that he lacks the intellectual tools to escape.

At one point, Cuomo lashed out at whites who oppose police reform, claiming that they are blinded by an “us-vs.-them” mentality. At another, He observed that if black Americans start getting guns, forming militias, and protecting themselves, “You’ll see a wave of change, in access and accountability. We saw it in the ’60s.”

Yep, that sounds like the perfect solution. No doubt it will provide solace to the grieving family of 21-year-old Traquez Swift who was killed in an Omaha mall over the weekend by a bullet from the gun of an 18-year-old black man and not some racist cop.

He’s absolutely right. This clip from @ChrisCuomo is a must watch. pic.twitter.com/FSJdUdjYgw

Much as it would trouble Cuomo to know, blacks are not the only people felled by police bullets. In February, a white driver in Montgomery County, Md., was shot 12 times at point-blank range by a deputy sheriff. In a familiar-sounding scenario, the deputy attempted to deploy his Taser, but when he was unsuccessful he shot the suspect instead. Maybe Chris Cuomo should be asking himself why the major news media never carried that story.