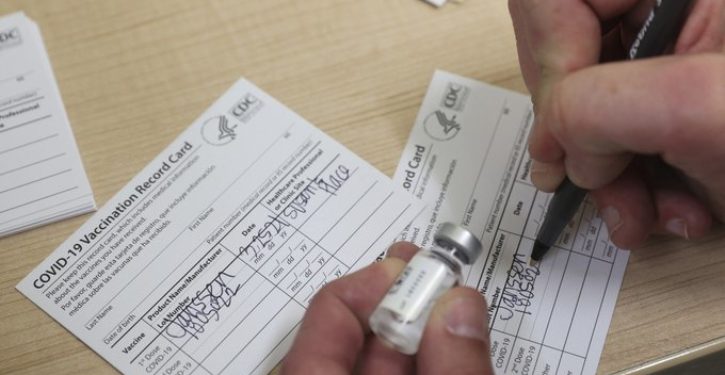 Worse yet, they’re now available online at eBay, Facebook, and elsewhere. The New York Times notes that the bogus “proofs of vaccination” started showing up for sale in late January. The cards measure 3 by 4 inches, just like the ones issued by the CDC, but don’t assume from their small size that they come cheaply. They sell for between $20 to $60 apiece.

All were forgeries or falsified copies of the Centers for Disease Control and Prevention vaccination cards, which are given to people who have been inoculated against Covid-19 in the United States.

“We found hundreds of online stores selling the cards, potentially thousands were sold,” said Saoud Khalifah, the founder of Fakespot, which offers tools to detect fake listings and reviews online.

The coronavirus has made opportunists out of many people, like those who hoarded bottles of hand sanitizer at the start of the pandemic or those who cheated recipients out of their stimulus checks. Now online scammers have latched on to the latest profit-making initiative: the little white cards that provide proof of shots.

The blame for the racket, above and beyond greed, rests largely with the federal government, which has assumed the role of Big Brother during the health crisis, but some of the the responsibility rests with Americans who deny that the virus is real and/or are resistant to getting vaccinated.

Presumably, the next frontier for the counterfeiters will be the vaccine passports the federal government has threatened to produce.

Liberal activists pressure Justice Breyer to retire because he’s against court packing
Next Post
VIDEO: Who are Merfin and Ruthers?