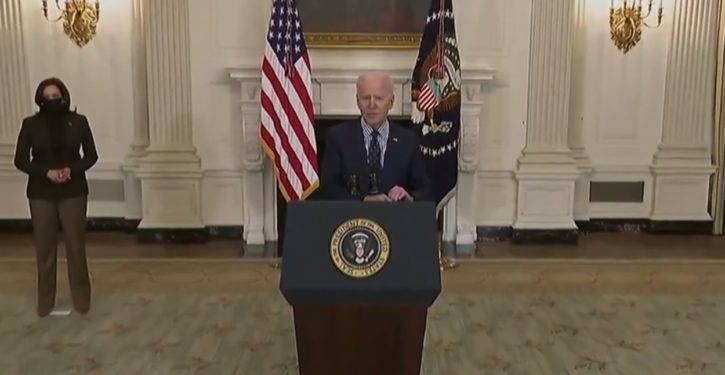 Biden announces Senate passage of "his" "COVID" "relief" bill from the White House. (VP Harris sticks the landing once again on her stage mark.) AP video via USA Today

Congress today passed a $1.9 trillion pandemic relief package, which President Biden is expected to sign later this week. This will trigger $1,400 payments to many people. But it will increase the national debt by $6,000 for every man, woman, and child in America, far more than the size of the payments ordinary Americans will receive. The House of Representatives passed the package today on a party-line 220-to-211 vote. The Senate passed the package on Saturday in a party-line 51-to-50 vote, with Vice President Kamala Harris casting the tie-breaking vote.

Only “one percent” of the package goes to fighting the pandemic by vaccinating Americans, notes Senator Ben Sasse. The “‘COVID Relief Bill’ is mostly an expensive bundle of politically motivated giveways” that has “very little to do with the pandemic,” reports Reason Magazine. It’s full of unrelated waste and favors for special-interest groups, according to the Foundation for Economic Education.

As the Washington Post notes, “President Biden’s American Rescue Plan alone is larger than most countries’ annual economic output, running slightly behind Italy and ahead of Brazil. And it is only the latest U.S. measure.”

Our country was already deep in debt, even prior to passage of the pandemic relief package. America now has as large a national debt compared to its economy as the debt-ridden European nations that had to be bailed out during the European debt crisis. Those countries’ national debts were almost 130% of their economy (GDP). But unlike those countries, which were small, our country is too big to bail out. So our future financial crisis could be a lot worse.

America’s national debt has never been as huge as it is now, either in absolute terms, or compared to the size of our economy (GDP). After World War II, our national debt reached 113% of GDP because of the huge cost of fighting a world war. But it’s way above that now, and we have no excuses for it, like a war. A pandemic isn’t a reason for the government to borrow lots of money: In 1919, America survived an even worse pandemic, the “Spanish flu,” without running a big budget deficit.

The pandemic relief package wasn’t needed for our economy, which is already growing rapidly. Instead, it contains provisions that will reduce economic growth in the future by encouraging people to work less and earn less money. It takes away some people’s $1,400 stimulus payments if they work harder and earn a little bit more money. It guts welfare reform, giving people welfare even when they could work. And it gives some people more money in unemployment benefits than they would get by working. It also rewards many federal employees for not working, by paying them $1,400 per week to stay home if their kids are out of school.

The pandemic relief bill isn’t expected to shrink the economy this year, which is expected to see robust economic growth. But the Congressional Budget Office says the COVID relief bill will shrink the economy in the long run. By increasing the national debt, it will drive up borrowing costs and make it harder for businesses to raise money and create jobs. That will slow the economy. “The existence of the debt saps the rest of the economy,” says the University of Pennsylvania’s Efraim Berkovich. “When the government is running budget deficits, the money that could have gone to productive investment is redirected … you’re taking away from the capital that we need to grow our economy in the future.”

Many people who get money from the relief package don’t need such payments, since they didn’t lose a job, or face increased expenses due to the pandemic. For example, prison inmates will get $1,400 stimulus payments under the COVID relief bill. Senator Bill Cassidy objected to that, saying prisoners have “their living and medical expenses paid for by the taxpayer,” “don’t pay taxes,” and “can’t be unemployed.” Senator Tom Cotton noted that “Dylann Roof murdered nine people,” yet “he’ll be getting a $1,400 stimulus check as part of the Democrats’ ‘COVID relief’ bill.”

The pandemic relief package also sends money to states that are flush with cash, to be spent with abandon. Some states were hurt financially by the pandemic, but tax revenue actually rose in 21 states, and in most cities and counties, in 2020. Yet, the package gives states $350 billion in aid, conditioned on the requirement that they spend it, rather than using it to cut taxes.