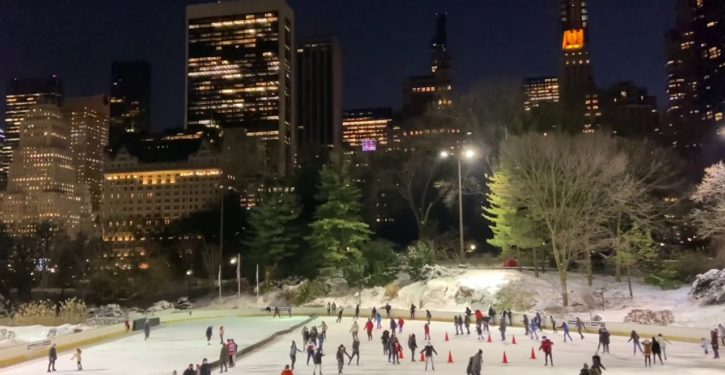 It’s a meme Democrats have long subscribed to: “What can I do today to spite Donald Trump?” In February 2019, then-presidential candidate Eric Swalwell hit upon a novel way to show his displeasure with the president. He tells all about it in this tweet:

It’s snowing in #NewYork. I need coffee. The closest cafe is inside Trump Tower. This is me walking to an alternative. pic.twitter.com/RLb0tAy2yT

Rep. Linda Sánchez’s contribution to the meme, which she unveiled Friday, was to introduce a measure in the House that would prevent “twice-impeached presidents” from being honored with statues, streets and federal buildings named after him, and so on.

For example three, we return to the Big Apple, where Mayor Bill de Blasio decreed last week that the Wollman Rink in Central Park, which ordinarily stays open through April, would be closing for the season this weekend. The move follows the city’s termination of its contract with the Trump Organization, which has operated the rink for the past thirty years. The decision, de Blasio explained, was made based on the Jan. 6 Capitol riots, which he believes the former president incited.

So how are skaters and tourists who flock to this picturesque site reacting to Hizzoner’s act of hatred? The New York Post spoke to several on Saturday. They said “they felt like pawns in de Blasio’s political game.”

“The real people they’re hurting are the 2,500 children that have been benefiting from the skating program this season and 250 innocent employees who have been keeping this going for us,” said Lee Krausner, 49, while watching her two daughters skate.

A petition to keep the rink open had garnered north of 1,700 signatures by Saturday afternoon.

“I was so upset. I’ve literally skated here since I was 3 years old. …. We know everyone here, it’s like a second family,” said [Sabrena] Sabet, 18, who was at the rink Saturday. “This is our senior year. So many things have already been ruined.”

Unfortunately, New Yorkers will have no political recourse against de Blasio, whose second and final term ends this year.

Closing the rink prematurely is de Blasio’s second act of spite against Donald Trump. In August of 2020, he authorized — and participated in — the painting of Black Lives Matter in outsize letters. The street he chose was Fifth Avenue outside Trump Tower. The only problem was that he neglected to obtain the city permit required for street “art.”

Biden blames genocide on Chinese culture
Next Post
Biden: Veterans are helping to fuel the growth of white supremacy