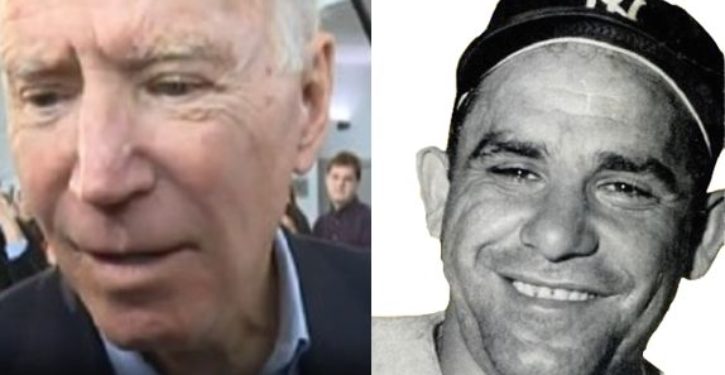 “When you come to a fork in the road, take it.” “You can observe a lot by just watching.” I always thought the record would stand until it was broken.”

These are just a few of the many memorable quotes attributed to New York Yankees Hall of Famer Yogi Berra. Often known as “Yogi-isms,” some of his observations — such as “It ain’t over till it’s over” — have become part of the American vernacular.

What makes many Yogi-isms so eminently quotable is that many, their fractured syntax notwithstanding, contain a germ of truth. Consider “If the world was perfect, it wouldn’t be.”

To appreciate the elusive wit and wisdom of Yogi Berra, you need but compare them against the pedestrian, often-embarrassing output of another mangler of the English language: Joseph Robinette Biden, Jr.

Joe Biden: "Everyone knows I like kids better than people" pic.twitter.com/Jf8Kqq7A6g

Unlike Yogi, not all of Biden’s slips of the brain are innocent. Many in fact are quite revealing. In August of 2019, for example, he said at the Asian & Latino Coalition in Des Moines that “poor kids are just as bright, just as talented as white kids.” He tried to repair the damage by explaining what he meant to say, but this made things worse:

Wealthy kids, black kids, Asian kids, no I really mean it, but think how we think about it. We think how we’re going to dumb it down. They can do anything anybody else can do given a shot.

On Tuesday, he drew from the same racist reserve by claiming:

Not everybody in the community, in the Hispanic and the African-American community, particularly in rural areas that are distant and/or inner city districts know how to use — know how to get online to determine how to get in line for that COVID vaccination at the — at the Walgreen’s or at the particular store.

When all is said and done, Yogi is remembered best for his achievements on and off the field of play. On the field, he was a three-time MVP and played in 75 World Series games, hitting safely in 71 of them. Off he served his country bravely in World War and was part of the D-Day invasion of France.

Joseph Robinette, in contrast, achieved little in his 44 years warming a seat in Congress and is off to a less than stellar start as commander in chief. Here’s hoping he doesn’t plan on falling back on his collected witticisms.