“Impeachment is just the beginning for Donald Trump. He and his lawyers are going to be in criminal and civil courtrooms all over the United States,” Butler said on MSNBC’s “Morning Joe.”

Butler added that Trump’s impeachment defense is similar to his defense in Georgia. “The defense is he didn’t actually mean it. It’s just Trump being Trump, you know how he is. So in impeachment he says, ‘When I tell my supporters to fight, I don’t mean that literally.’ In Georgia it’s the same. When I say, ‘you need to find 100,000 votes,’ I didn’t actually mean that,” Butler said.

“And the Republicans in the Senate may fall for that defense of ‘don’t believe your lying ears,’ but I don’t think an Atlanta jury would. I don’t think that juries in these states where Trump faces civil and criminal liability are going to be nearly as sympathetic as these 44 Republican senators,” he continued.

The Trump campaign launched multiple lawsuits over alleged voter fraud in the days and weeks following the presidential election.

The former president requested that Georgia Secretary of State Brad Raffensperger “find” a sufficient amount of votes to win Georgia through a recount, according to a conversation The Washington Post published in January.

The Post first released part of the phone conversation between Trump and Raffensperger that was over four minutes long and afterwards unveiled the full transcript and phone call audio.

The House voted 232-197 on Jan. 13 to impeach the former president again, charging him with a single article of “incitement of insurrection.” Convicting Trump requires 67 Senate votes, including at least 17 Republican votes, according to The Hill.

Trump’s trial is set to last the weekend and may end at the beginning of next week, The Hill reported. 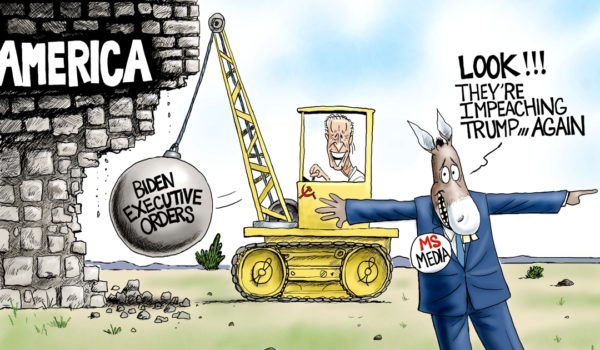 Cartoon of the Day: Homewrecker
Next Post
Joe Scarborough: Republicans ‘don’t care about the cop killers’