Hunter Biden continues to hold a 10% stake in the Chinese private equity firm BHR Partners, Chinese business records show, despite multiple reports from December suggesting he was divesting his position in the company.

Both the Daily Mail and Fox News reported in late December that Hunter Biden was in the process of offloading his stake in BHR. Both outlets cited an unnamed source with Hunter Biden and his business dealings.

But Hunter Biden continues to hold his equity stake in BHR through his company, Skaneateles LLC, as of Wednesday, according to Qixinbao and Baidu, two independent services that provide business records on Chinese corporations based on China’s National Credit Information Publicity System.

Hunter Biden is the sole beneficial owner of Skaneateles LLC, according to Washington D.C. corporate records.

BHR manages the equivalent of $2.1 billion in assets and is co-owned by the Chinese state-controlled Bank of China.

Hunter Biden’s lawyer, George Mesires, did not return numerous requests for comment asking to confirm if his client is in the process of offloading his stake in BHR and when he expects that process to be completed.

Mesires said in an October 2019 statement that Hunter Biden had not received any return on his investment in BHR, but emails located on a copy of Hunter Biden’s alleged laptop show that he was told on multiple occasions by his business partner Eric Schwerin that he would begin receiving significant payments from the firm beginning in 2019, the Daily Caller News Foundation previously reported.

Schwerin also told Hunter Biden in a December 2018 email that he can expect the Chinese firm to generate income for him “over the next couple years.”

Mesires also said in the October 2019 statement that Hunter Biden would step down from his position on BHR’s board of directors, a move that President Joe Biden lauded as a representation of “the kind of man of integrity he is.”

BHR’s business records were updated six months later in April to reflect Hunter Biden’s departure from its board, the DCNF previously reported.

Joe Biden promised in no uncertain terms during his presidential campaign that no one in his family would engage in foreign business if he was elected president.

“No one in my family will have an office in the White House, will sit in on meetings as if they are a cabinet member, will, in fact, have any business relationship with anyone that relates to a foreign corporation or a foreign country,” Joe Biden told reporters in Iowa. “Period. Period. End of story.”

Joe Biden reiterated his pledge in December 2019, telling Axios on HBO in reference to his family and former President Donald Trump’s foreign business dealings: “They will not be engaged in any foreign business because of what’s happened in this administration.”

Hunter Biden revealed in December that he was notified that federal prosecutors were investigating his “tax affairs.” Multiple news outlets have reported that investigators are looking into whether Hunter Biden violated money laundering laws in regards to his foreign business dealings in China and elsewhere.

A White House spokesman did not return a request for comment.

The Senate likely won’t come close to the 67 votes needed to convict Trump, so why bother?
Next Post
Cartoon of the Day: We’re not in Kansas anymore 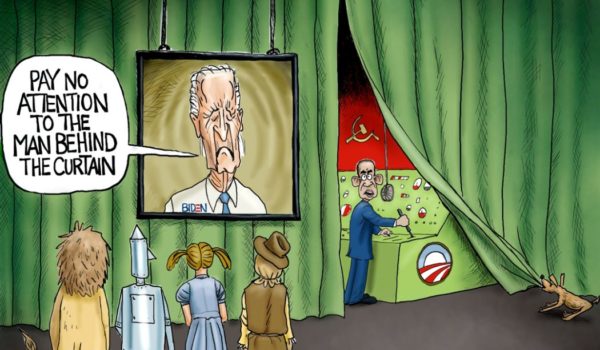