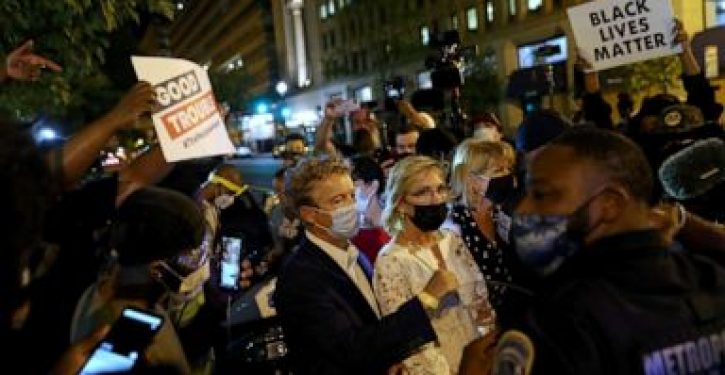 Yesterday the Senate voted down Rand Paul’s bid to abandon the misguided impeachment trial against former Pres. Donald Trump, which is scheduled to begin next week. In reaching this vote, they evidently turned a deaf ear on Paul’s rousing floor speech challenging the notion that Trump has a corner on the incitement market — if in fact we accept the theory that Trump’s words on Jan. 6 were the spark that touched off riots at the Capitol. It has since been determined conclusively that plans for the attack were forged days ahead of the president’s speech.

In the speech, a video and partial transcript of which follows, the Kentucky senator cited numerous examples of Democratic leaders whose words stirred the passions of voters to take physical action against Republicans.

Paul’s speech is worth watching even though he omitted one of the most famous examples of incitement by a Democrat. That was then-Pres. Barack Obama urging Latinos to “punish their enemies,” meaning members of the GOP. Here’s the quote in context:

If Latinos sit out the election instead of, ‘we’re going to punish our enemies and we’re going to reward our friends who stand with us on issues that are important to us’ — if they don’t see that kind of upsurge in voting in this election, then I think it’s going to be harder.

Obama even conceded the potential for violence implicit in his “instruction, telling a radio host, “I probably should have used the word ‘opponents’ instead of enemies.” Yes, “punish your opponents” has a far more conciliatory tone!

This sham of an impeachment will ostensibly ask whether the president incited the reprehensible behavior and violence of January 6 when he said, “I know everyone here will soon march to the Capitol to peacefully and patriotically make your voices heard.”

[Interjection: Not at all.]

No Democrat will honestly ask whether Bernie Sanders incited the shooter that nearly killed Steve Scalise and volunteer coach. The shooter nearly pulled off a massacre — I was there — because he fervently believed the false and inflammatory rhetoric spewed by Bernie and other Democrats, such as, “The Republican health care plan for the uninsured is that you die.”

As this avowed Bernie supporter shot Steve Scalise, nearly killing him, and shot one of our coaches and two or three of our staff, he screamed, “This is for health care.” Ask me, or anyone, if that’s incitement.

No Democrat will ask if Cory Booker incited violence when he called for his supporters to get — get “up in their face” of congresspeople — a very visual, and specific incitement. No Democrat will ask whether Maxine Waters incited violence when she told her supporters, and I quote, that “If you see a member of the Trump administration at a restaurant, at a department store, at a gas station, or any place, you create a crowd, and you push back on them.” Is that not incitement?

My wife and I were pushed and surrounded and screamed at by this same type of mob that Maxine likes to inspire. It’s terrifying to have a swarm of people threatening to kill you, cursing at you and literally holding you hostage until police come to your rescue. That night we were assaulted by the crowd, I wasn’t sure if we would survive even with the police protection. But no Democrat suggested impeaching Maxine for her violent rhetoric.

Kamala Harris famously offered to pay the bill for those who were arrested. I wonder if she’ll be brought up on charges of inciting violence for that now that she’s Vice President.

Should Kamala Harris be impeached for offering to pay for violent people to get out of jail who have been burning our cities down? No! And no Republican has offered that, because we’re not going down the road the Democrats have decided, this low road of impeaching people for political speech.

Should Republicans impeach the Democrat mayor of Seattle who incited and condoned violence by calling the armed takeover of part of her city a “summer of love”? Any Republicans try to impeach her?

On June 8, the New York Post, citing U.S. Justice Department statistics, reported that more than 700 law enforcement officers were injured during the Antifa/Black Lives Matter riots. There were at least 19 murders, including 77-year-old retired police officer David Dorn. Yet Democrats insist on applying a test of incitement to a Republican that they refuse to apply to themselves.