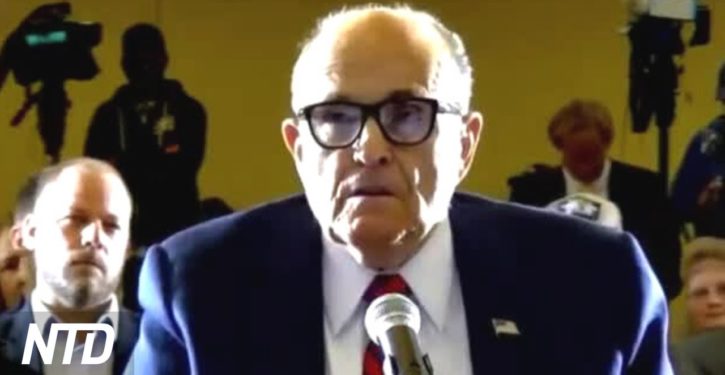 It’s hard for people to accept that their candidate has lost the election. I have progressive relatives who still haven’t accepted the outcome of the 2004 election, in which President George Bush defeated John Kerry by a 2% margin in the swing state of Ohio. They think Kerry was robbed of victory in that state by Diebold voting machines (even though Diebold machines were used in only two of Ohio’s 88 counties).

Today, many Republicans don’t accept the fact that Donald Trump lost the election to Joe Biden.

As Politico notes, some progressives refused to accept the outcome of the 2004 election, based on imaginary vote fraud in Ohio, whose 20 electoral votes were essential to Bush’s win over Kerry. If Bush had lost Ohio, Kerry would have had 272 electoral votes to Bush’s 266, making Kerry the winner. Politico asks, “The 2004 vote-fraud conspiracy movement never really died. What does that mean for Trump’s true believers—and America?” Progressives variously attributed the fraud to “Karl Rove, working with the private companies that manufactured the machines;”  “the military-industrial complex;” or shadowy “extra-governmental elites.”

Even after the vote-fraud conspiracy allegations were debunked by investigative reporters — including at a progressive publication, Mother Jones — millions of progressives continued to believe in it. As Politico notes, even today, “Many of them still believe that. Their continued commitment to the idea even today reveals that, once sown, doubt in the democratic process is difficult to dispel. Rather than recede with age, in many cases these 2004 skeptics’ concerns only deepened.”

Similarly, many Republicans continue to believe Trump won the 2020 election, notes Politico, “even as court after court has rejected his legal arguments” and “even after the Electoral College confirmed Joe Biden’s victory.” As I discussed in the past, the legal challenges to the 2020 election outcome were meritless. Almost all the challenges were frivolous, and completely lacking in evidence. The few that weren’t frivolous didn’t involve enough votes to change the outcome of the election and were generally barred by the doctrine of laches.

As a lawyer who has litigated voting-rights issues in the Supreme Court, I was not surprised that all of the pro-Trump legal challenges failed. That was exactly what I expected, after reading the documents filed in those challenges. Many of these challenges were as sloppy as they were devoid of logic and evidence. In one court complaint, “the word district in the court name was misspelled twice on the first page of the document. First there was an extra “c” for DISTRICCT and then, a few words later, ‘DISTRCOICT.’”

Trump should have fired lawyers like long-time Democrat Lin Wood, who embarrassed him by making transparently bad arguments in a careless way in their challenges to the election results. Wood was consistently foolish and sloppy to the point of misspelling his own name, and declaring that his facts were “plenty of perjury” — unintentionally calling himself a liar.

Shall we dance? Cancel culture claims its latest victim
Next Post
The key supporting effort appears to be underway on Trump’s operational timeline