To see what’s wrong with our election system, just look at all the claims and allegations being made in the litigation filed by the Trump campaign and other organizations contesting the outcome of the presidential election. Regardless of what happens with that challenge, state legislatures should take note of the underlying problems, which have existed for years, and finally do something about them — before we have our next set of state and federal elections.

The Heritage Foundation has an Election Fraud Database that provides a sampling of proven fraud cases from across the country. It highlights the many vulnerabilities in the election process that can be — and are — exploited by those willing to game the system. It is everything from non-citizens registering and voting, to vote-buying and submission of fraudulent absentee ballots, to individuals voting more than once because they are registered multiple times in the same state or are registered and voting in two different states (like former Democratic congressional candidate Wendy Rosen was caught doing in Maryland and Florida).

Anyone who doubts this type of activity can make a difference in an election should look at what happened this past summer in Patterson, N.J., where a new municipal election was ordered and four locals were charged with absentee ballot fraud. Or the 9th District congressional race in North Carolina that was overturned in 2018 due to absentee ballot fraud and illegal vote harvesting by a political consultant and six of his staffers, all of whom were criminally charged.

But it is not just intentional misconduct. It’s also the errors, mistakes, and incompetence of sloppy, inefficient systems that exacerbate all of these problems. Like state election officials not doing something as basic as checking the addresses of newly registered voters with county tax records to ensure they are really residential addresses where someone lives, as opposed to a vacant lot or a mall or a UPS store. Or modifying their registration software to detect multiple registrations by the same individual with only slight variations in his or her name, such as using a full middle name in one registration but only the first initial of that person’s middle name in a second registration. In many states, that will get you registered twice without election officials noticing, which will then allow you to vote twice with little chance of detection.

There are a whole series of steps that need to be taken by state legislators to fix these problems, and they should act in the upcoming legislative sessions that will start in many states in January 2021. It should be the states, not Congress, that address these issues, since the states are primarily responsible under our Constitution for administering elections.

There is no doubt they will run into opposition, and left-wing advocacy groups will sue to try to stop any reforms that would fix these problems and make it harder to cheat. States just need to be prepared to defend their reforms in court, the way states that have implemented voter ID laws have, usually successfully.

In fact, that is the first reform states need: requiring a government-issued photo ID to vote not just in-person as in Georgia and Indiana, but also for absentee ballots, as is the law in Kansas and Alabama. That includes providing an ID at no charge for the tiny percentage of the residents of their states who don’t already have one. And states need to modify their driver’s licenses, which are the default national ID card used by the average American every day for many different purposes besides voting, to conspicuously note whether the individual is a citizen or not.

Unfortunately, it is easy for a non-citizen, legal or illegal, to register and vote with little chance of being caught, because states don’t verify citizenship. That needs to change. States should require proof of citizenship to register to vote. They should also use available Department of Homeland Security records to check the citizenship of registered voters.

Absentee ballots are the only ballots voted outside the supervision of election officials and outside the observation of poll watchers, making them particularly susceptible to fraud, forgery, theft, and numerous other problems we’ve seen surface in this year’s election. For that reason, the use of absentee ballots should be limited to individuals who have a valid reason, such as being disabled or out of town on Election Day, to vote absentee. They should require witness signatures or notarization and the signatures of voters on both absentee ballot request forms, and the absentee ballots themselves should be compared to the signature of the voter on file before they are accepted.

With all of the disputes over absentee ballots received after Election Day, the deadline in every state for receipt of a completed absentee ballot should be Election Day itself. Voters have many weeks prior to Election Day to obtain and vote via absentee ballot. There is simply no reason to have a deadline past that day. Additionally, vote-harvesting should be banned in every state. You are just asking for trouble if you give candidates, campaign staffers, party activists, and political consultants the ability to pick up and handle the ballots of voters – including subjecting voters to coercion and intimidation.

Absentee ballots should only go to voters who request them — there should be no automatic mailing of such ballots to all registered voters. Why? Because as this and past elections have shown, state voter registration lists are in terrible shape, filled with voters who have moved, died, or otherwise become ineligible. That is because many states are not taking the most basic steps to keep their lists accurate and up-to-date. They need to be comparing their voter-registration lists with other states; using available state, federal, and commercial databases such as credit agencies, tax records, driver’s licenses, and public assistance filings; Department of Homeland Security alien records, and deaths listed by the Social Security Administration and other government agencies.

These fixes are just a start. There are many others to add to this list, including more vigorous investigations and prosecutions of fraud by election and law enforcement officials who all too often don’t want to know about these problems or don’t take them seriously.

We have razor-thin elections all the time in this country at the federal, state and local levels. As the Supreme Court and many others have pointed out, including the bipartisan Carter/Baker Commission on Federal Election Reform, fraud can make the difference in a close election. And so can errors and slip-ups by election officials. That is why state officials all over the country need to concentrate on addressing all of these vulnerabilities and problems and finally do something about them.

Hans A. von Spakovsky is a Senior Legal Fellow and Manager of the Election Law Reform Initiative at The Heritage Foundation and a former election official. He is the co-author of “Who’s Counting? How Fraudsters and Bureaucrats Put Your Vote at Risk” and “Obama’s Enforcer: Eric Holder’s Justice Department.” 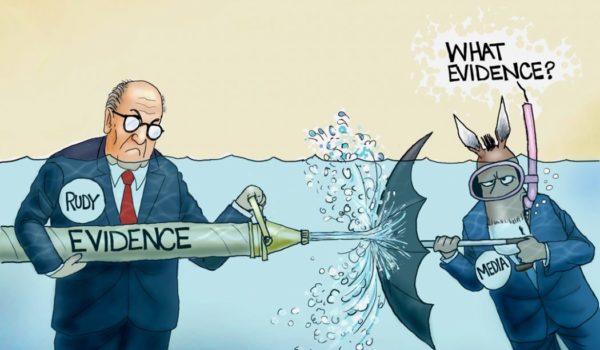 Cartoon of the Day: Widespread censorship
Next Post
Joe Biden’s dog story turns out to be a fish tale