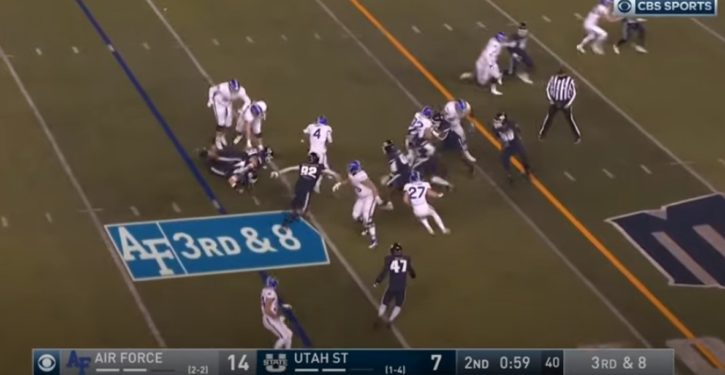 Usually, about this time, it’s starting to get a little bleak out there.  C-USA typically still has a bunch of games lined up, because that’s how they do.  Sun Belt keeps churning at about half power.  But everyone else is hunkered down for the conference championships: two teams with a game left to play, everyone else off with the trainers and sports-med folks putting ice on stuff; coaches able to focus on high school recruiting (or polishing their resumes up).

Nostalgia, nostalgia.  This year we’ve been in the weird sudden-death twilight of early December since week 1, in September.  So what’s a few snowflakes or a 4:30 PM sunset to us?

Air Force, we’re happy to say, not only played on Thursday night but rolled over Utah State like a buzzsaw, 35-7.  So we’ve got that going for us.  Melancholy Cancellations have left us with a quiet Friday evening, however, as two games disappeared and U-LA-LA has already prevailed over Appalachian State 24-21.

New #24 University of Tulsa Golden Hurricane, which beat Notre Dame 28-27 on 30 October 2010, is scheduled at the moment to no-kidding play at Navy on Saturday afternoon.  Since TU can throw as well as run, to go with that conference-topping D, the oddsquad has them giving a healthy load of 12 points.

#11 Oklahoma likewise looks promising for hosting Baylor Saturday night.  No one is ever beanbag when OU is on the resurgent, so we’re shaking the totem like mad as we always do.  Sooners give 22.

New #15 Oklahoma State took the weirdest darn jump of 8 places in the ranking, for a lackluster win over Texas Tech in which the OK-State defense looked, shall we say, feckless and feeble.  OK, fine, it wasn’t quite that bad, but then, the rankings are just imbecilic this fall anyway. (Even if it were some strange thing about making the Big-12’s top three look more competitive, it’s just not clear why anyone would do that, since the CFP top four are unlikely to be knocked off-stride by their remaining opponents.  Whatever.  Headache.)

The Pokes will be in Fort Worth Saturday morning to meet our very own TCU in what ought to be a pretty good game.  TCU slew Kansas (motto: “What difference, at this point, does it make?”) all over the lot last week, but then, who doesn’t.  Pokes give 3.

Army is in leisurely prep mode for The Game on the 12th.

Air Force is all but done after the win at Utah State.  The makeup game with Army for the Commander’s Trophy will be 19 December.

Virginia Tech hosts #3 Clemson in the marquee slot on Saturday evening.  We’d like to think there’s a possibility of it being a big game.  The oddsdudes are being party-poopers in that regard, with Clemson giving 21, and we fear they may be onto something.  But go Hokies!  With you to the end!

Nevada just edged out Hawaii last week, and will host Fresno State on Saturday in what turns out to be a mattering kind of a game at this point.  The 5-1 Wolf Pack is lurking at third place in the undivided MWC standings of this COVID year, behind Sudden San Jose State (4-0) at #1 and Boise State (4-1 overall; 4-0 conference) at #2.  The Bulldogs, meanwhile, are in the #4 slot behind Nevada with a 3-1 record.  So it’s getting a little exciting in the MWC, especially with Nevada coming up at SJSU on Friday the 11th.  The Pack (-6.5) can beat Fresno State, but we think it may be a tad closer than the spread

LSU hosts #1 Alabama on Saturday, another game we’d love to have be a bigger one for our Inner Circle.  LSU-Alabama is, of course, a many-Storied Rivalry, and all of them are tall, broad, and talk like John Wayne in a James Earl Jones voice.  We regret, in this rebuilding year for the Bengal Tiggers, to have to bow to the oddsquad on the Tide’s 29-point give.  We at least think LSU can cover.

We understand from the NW Concession Booth contingent that we are free to cut Kansas State loose from the Inner Circle now, and we’re saddened to hear there seems to be some kind of P.C. curse settling over Manhattan.  With so little of the season left, and with the Wildcats hosting Texas on Saturday, we plan to hold our vote on the excommunication just as soon as the Big-12 fat lady sings her last.  Texas has been de-ranked again, and is not having a fun year, but gives 7 in this one.

Toledo has what is typically a big game, but doesn’t seem like it will be quite the usual MAC power shindig this time, at Northern Illinois on Saturday early.  The Huskies are 0-4; the Rockets at 2-2 we perceive to be better than their record, but again, the COVID cloud lurks over all.  Toledo has the nod by 9.5.

Wyoming (2-2) will be at New Mexico (0-5), fully explaining the Pokes’ 18-point give.  If they tire of football by the second half, the teams can probably fit in some home remodeling consultations while they’ve got Dreamstyle Stadium to themselves.

#4 Ohio State (-23.5) at Michigan State busts the gate for us Saturday morning.

#5 Texas (-5.5) A&M at Auburn does likewise.  (We’re watching this one like a hawk.  Still struggling to be Aggie believers.)

#6 Florida heads to Tennessee for their massively Storied Rivalry, which for the first time in who even knows how many years was not played in September.  The Gators are giving 17.5.

#7 Cincinnati has the week off to prepare for the meet with Tulsa next week.

#8 Georgia has been Solemnly Postponed with Vanderbilt.  And no, we’re not going to make any placekicker jokes, sorely tempting as it may be.  We do entertain with a merry eye the thought that there may be a jinx brought on by the passing notice from Hillary Clinton.

New #9 Iowa State has taken a 4-slot jump and hosts West Virginia, pride of the Big-12, on Saturday afternoon, giving 6.  (Who else is suspecting an OU-ISU Big-12-off?)

Our count of Solemn Postponements and Melancholy Cancellations for the week is again at eight.  Most of them won’t be missed much (Maryland at Michigan is on the list, in addition to the Georgia game and Northwestern at Minnesota), but the AAC will feel the loss of the Houston-SMU game.

We note, as an update from last weekend, that Colorado (motto: “We take a pounding!”) prevailed over San Diego State 20-10 in their rare, sort of off-grid meet.

The ticket-toppers are mostly playing badly overmatched underdogs this week, and Storied Rivalries are few.  We don’t feel terrible suggesting a look-in on Arkansas at Mizzou (-2) in the Storied Rivalry for the Battle Line Trophy, which has the distinction of entailing only 11 total games since 1906.  Arkansas and Missouri are just the very states that would decide they need to declare a Storied Rivalry over a match that’s been held 11 times in 114 years. (The top Power-5 talent often manage to play at least two other conference teams more than 11 times in fewer than 11 years, without calling “rivalry!”  So our hats are off to the Battle Line faithful.)

For the curiosity of it, you might want to set your reminders for #13 BYU (-10) at #18 Coastal Carolina on Saturday.  It’s not just that the two teams will be meeting for the first time (not always a given with the well-traveled Cougars); it’s that the first time they meet, they’re both ranked.  We know you know 9-0 Coastal Carolina is the Chanticleers, they’re Sun Belt, and they’re located in Conway, South Carolina, about eight miles from Dog Bluff.

But on the other hand, when we see that Boston College is at Virginia (-3.5), we are moved to plead with you, “Just say NO!”

In Trump’s campaign to save the Republic, we haven’t seen the key supporting effort yet
Next Post
San Diego teachers forced to attend white privilege seminar, admit being racist