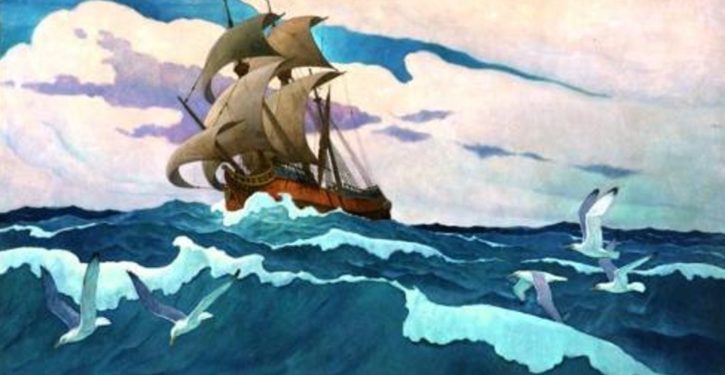 Almost exactly 400 years ago, the passengers of the Mayflower arrived at Cape Cod, off what is now Massachusetts, to inaugurate their experiment in forming a new and unique colony in North America.

A few writers have tackled this topic in November 2020, because of that anniversary.  Such is the chary state of the American national conscience in this astonishing year, after a 100-year hail of psychological abuse from the radical left wing of modern civilization, that the anniversary has hardly been mentioned in the mainstream media.

But it is the most important anniversary in America’s history, other than the landmark anniversaries of 1776.  Indeed, there’s an argument that it is the most important.  North America was colonized by multiple European nations; the whole Western hemisphere was.  They brought differing cultural luggage with them: Spain, France, the British Isles, the Netherlands – all arrived within a few decades of each other in North America and left indelible marks, colonies and enterprises that took root.

But what the United States of America became was a course set by the Pilgrims who arrived in 1620 and founded Plymouth Colony.  Tyler O’Neil, writing at PJ Media, laid out why in his article of 21 November.  He did so briefly but eloquently, quoting the Mayflower Compact, with its reference to establishing a “Civil Body Politic,” and following it up with a few sentences thus:

The real meat of the Mayflower Compact comes down to the phrase “civil body politic.” As Wood explains, the term simply refers to “a group of people who agree to govern themselves by common rules to be created through peaceful deliberation. That means it isn’t a tribe, a dictatorship, or an aristocracy. It offers an ordered public life under the rule of law.”

[A]s Rebecca Fraser put it in The Mayflower: The Families, the Voyage, and the Founding of America, “the Mayflower Compact has a whisper of the contractual government enunciated in the 4 July 1776 Declaration of Independence, that governments derive their just power ‘from the consent of the governed.’”

Both documents are attempts to forge a new unity — ‘a civil body politic’ — out of disparate people who have conflicting interests,” [scholar Peter] Wood explains. “Both call into existence a new government, and both justify that government as needed for safety, good order, and justice. Above all, both project the ideal of self-government as the only way to achieve the ‘general good.’”

Wood argues that the Mayflower Compact was not America’s “true founding” — and neither was August 20, 1619 — but it was a “crucial pre-founding, informing the beginning of the American republic.” On the Mayflower, “an idea of true self-government began to take root.”

The O’Neil piece resonated particularly with me because only days before, I had been in an email exchange with some writing colleagues that caused me to mount my own defense of the significance of the Mayflower and 1620.  The quotation from Rebecca Fraser – on the Mayflower Compact’s “whisper of the contractual government enunciated in the 4 July 1776 Declaration of Independence” – continued the theme I had written on.

It’s the most important theme in America’s history of life and purpose, one that assigns government a limited and pragmatic role in human arrangements.  Government is a contract, not a focus of belief, a vocation, or an agent of eschatological transformation.  We do not endow it with occult powers or petition it in fear and trembling.  We select it and pay it to perform services for us.

Above all, it does not invade what I think of as the “God space” around each of us: the space of spirit and moral conscience meant to relate to God our Creator.  Rather, it protects that space, acknowledging that what we elect to do in it is the sovereign choice of each of us.  That space was always meant to be free of extortion by the influences of this earth – including the right of each person to believe in no god at all, if he or she chooses – and that is what America’s Founders meant with the very first words of the Bill of Rights: “Congress shall make no law respecting an establishment of religion, or prohibiting the free exercise thereof.”

Speaking in a positive tone, with admiration, of this refrain in America’s philosophical history has fallen out of vogue.  Many people are more apt now to be sarcastic or at least mildly cynical about it.  But that’s something I can’t do.  It’s too important, America’s unique history of religious freedom and remarkably limited religious strife.  America is where Protestants and Catholics came to stop slaughtering each other.  The Americas, and in some ways especially the North American colonies, were a haven for the persecuted Jews of Europe.  In later centuries, the faithful of other religions arrived on our shores, and the response of the civil body politic was to expand the sphere of tolerance.

None of this happened in a perfect way, as if unfolding in a fable or a morality play.  But to suggest it didn’t really even happen is to retail an evil lie.  Nowhere, ever, has religious diversity been as organically and indigenously tolerated by a national society – and in a friendly, not a repressive way – as in the United States.

We are in grave danger if we make light of this blessing, or speak cynically about it, or belittle or minimize its reality and import.  So, regardless of any mocking there may be, some of us have to keep the fire lit.  Making fun of the determination to appreciate and celebrate this history of a civil body politic – government that is not “god” to us, and not religion, but rather respects and protects our religious rights – is an unworthy way of spending time.

If we want to keep the blessing, there must be people among us who continue to proclaim that it is a blessing, and one we cannot do without.  If 2020 has not opened our eyes to why, we simply aren’t paying attenti0n.

For those who are interested, I have copied below the email I wrote before Tyler O’Neil’s article came out, just as it was written.  Its opening sentence alludes to the “1619 Project,” hence the reference to 1620 being contemporaneous.

Happy Thanksgiving, one and all.

It has been interesting to me how few (if any) critics have pointed out the contemporaneous and most significant defining event of American history, which would be the arrival of the Mayflower in December 1620 with its boatload of religious dissidents.

Imperfectly as they may have represented the philosophical case for religious freedom at the time, they were some of the closest in 17th century Europe to believing in it.  They didn’t want to burn or be burned at the stake, and they didn’t want to be impressed at birth into a state-run religion.  Their purpose in migrating to North America was to establish a new order in which there would not be a state-run church to consecrate armies and tax collectors. Perhaps they didn’t explicitly envision harboring Catholics and Jews in peace, but what they did envision, unlike any government of Europe and most of the established churches, was the conditions for doing so.

That is actually a much greater distinction of what eventually became the USA than having slavery on our shores.  Everyone has had slavery, including the indigenous peoples of the Western hemisphere before European arrived.  No one else – no one, ever – has had as little armed compulsion in religion as the United States.  Yet few have been as friendly to religion.

In 1619, every single one of the current advocates of the “1619 Project” would have been the establishment merchants and their apologists in politics and the press, all with their charters from the king, importing the first African slaves.

In 1620, it’s not those people who would have sought to flee religious persecution in Europe and set up an order in which persecution could not be institutionalized.  It’s the ones who today dissent from the chartered establishment – not to tear down order, like anarchists and those setting the stage for a five-act Marxist tragedy, but to reconstitute it for middle-class householders and their greater liberty.  Over time, the so-called Pilgrims’ vision remained remarkably true as a spirit animating the new settlements and colonies, in spite of the inevitable forces of pasteurization and homogenization that set in with such movements.  For the next three and a half centuries, people from seemingly irreconcilable backgrounds fled to North America (and some to parts of the Caribbean and South America too) to escape persecution that was largely religious in its basis.  Dissident Protestants (i.e., those not content to participate in state-run churches) may have been the first to flee Europe, but Catholics came soon enough afterward, and other Protestants, and Jews, and Orthodox Christians, and eventually Muslims and Hindus and Buddhists from the greater Eastern hemisphere, and all were able to live and flourish in peace.

Eventually the abolitionist movement in the Northern USA became the driving political force behind ending slavery – a movement that was led by prominent Christians (and Jews) for avowedly religious reasons.

This history, of course, doesn’t consciously incorporate that of the indigenous peoples, or probe the depth of the history of slavery in the Americas, and both are indispensable to a full accounting.  (Along with the colonial careers of Spain and Portugal, as well as Britain, France, and the Netherlands.)  These histories are already intertwined deeply and inextricably in the cultural DNA of America, and we would not be who we are without them.

But imagining we understand the history and meaning of the United States without focusing on religious freedom and 1620 is like imagining we understand the history and meaning of modern Israel without focusing on Zionism and, say, Petah Tikva (or choose something you feel is more representative; I like Petah Tikva because it was a landmark settlement by Zionists with a vision, like Plymouth.  Today’s Israel is the descendant of Petah Tikva in a way it is NOT the descendant of British or Ottoman politics or the vagaries of European wars and upheavals – including even the Holocaust.  The spirit of vision for modern Israel preceded the Holocaust by many decades).

1776 was, like 1620, the inauguration of a conscious purpose, and one with an undoubted basis in belief about a providential God.  1776 is the next waypoint of 1620, and in fact one that was envisioned in 1620, as in no other landmark date or event, if only in the haziest outline.  Like the USA, Israel was established (or reestablished) in 1948 for a purpose; she didn’t just happen.  It’s the purpose that matters. The rewriting of history for both nations is an attempt to erase that purpose and the animating spirit of each.  Writing that spirit out of history writes off any reason for Israel and the USA to continue to exist.

As always, an encouraging musical interlude to go with.