They’re tough questions, but someone’s got to ask them. So why not Sen. Mazie Hirono (D-Hawaii), who is slowly but surely making a name for herself by asking — how shall we say? — “interesting” questions.

Hirono first attracted public attention as an interrogator par excellence when she asked a class of eighth-grade students if they thought government should be taking away their “abortion rights” — and then boasted about having done so.

But the senator really turned heads during the confirmation hearing of now-Justice Amy Coney Barrett when she asked if the then-judge had ever raped anyone. Hirono prefaced the off-the-wall question by noting that it’s something she asked of every judicial nominee in line “for a lifetime appointment to the federal bench or to any of the other positions.”

So it should have come as no surprise when she asked Thomas Kirsch, a nominee for o a seat on the United States Court of Appeals for the 7th Circuit, “Since you became a legal adult, have you ever made unwanted requests for sexual favors or committed and verbal or physical harassment or assault of a sexual nature?”

But before she got to that question she launched into a bizarre, lengthy, and disjointed lecture on COVID-19 and lack of diversity in judicial appointments

Thank you. I would like to note for the record that we are experiencing record numbers of people testing positive, including, most recently, Senator Grassley, our colleague testing positive for COVID, and more people dying, and yet here we are trying to put more judges for lifetime appointments for our various courts. So, rather than dealing with a COVID situation that has impacted so many families and workers and businesses, we’re spending time doing this, which is, by the way, it’s unprecedented that we should have a hearing like this in the remaining days of the president. So in this case I am particularly concerned that this committee is holding a hearing for the 7th Circuit nominee who is further entrenching on the lack of diversity that is characteristic of President Trump’s judicial nominees. The NAACP has observed that the 7th Circuit is the only all-white court of appeals in the country, even though 30% of its residents are people of color. And moreover, this seat is only available because Senate Republicans blocked President Obama’s nominee Myra Selby, who would have been the first African-American to serve on the 7th Circuit from Indiana. I find the discussion on the originalism pretty interesting, because when we refer to Supreme Court decisions such as Plessy and Brown v. Board of Education, it’s very clear that judges do not come to their positions like blank slates, tabula rasa. Justice Rehnquist made that observation. Clearly, the courts and Supreme Court had changed its mind, and if Mr. — sorry, if our nominee views himself more as an originalist, then we can look forward, I suppose, to this current Supreme Court revisiting Obergefell, which Justice Scalia said there was no basis in Constitution for same sex marriage, echoed by Justice Alito and Thomas, who have signaled that they would like to revisit Obergefell. I asked all nominees for any of the committees on which I sit the following two questions, and I’m going to ask you this question. Since you became a legal adult, have you ever made unwanted requests for sexual favors or committed and verbal or physical harassment or assault of a sexual nature?

As Liberty Unyielding contributor and attorney Jerome Woehrle reminds us, a federal appeals court allowed a woman to sue over invasive questions by federal officials, claiming that federal officials violated her constitutional privacy rights by questioning her about private details of her “home life.” Woehrle goes on to note: 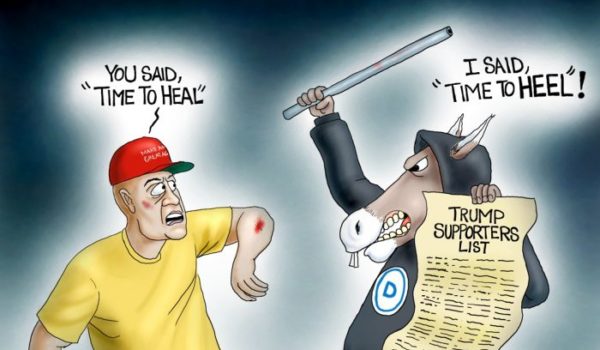 Cartoon of the Day: Resist we much
Next Post
Firm linked to top Biden advisor lobbying to soften U.S. trade policy toward China