Why did Donald Trump narrowly lose in Georgia? Perhaps because he encouraged voters not to vote by mail. That resulted in fewer Republicans casting ballots at all, because some wouldn’t — or couldn’t — vote in person. Georgia’s Republican Secretary of State says that 24,000 Republicans who voted absentee in the primary election did not vote in the general election. He says Donald Trump cost himself the election by sowing distrust in voting by mail, and whether states would count mailed ballots fairly: “He would have won by 10 thousand votes he actually suppressed, depressed his own voting base.”

Democrats appear to have foolishly engaged in their own voter suppression, by falsely claiming that earlier Georgia elections were rigged against Democrats. In 2018, the Democratic candidate for governor of Georgia, Stacey Abrams, “lost by nearly 55,000 votes and never did concede,” notes NPR. Instead, she baselessly complained that she had been cheated out of a legitimate victory by a racist state government. That may have left some voters with the false sense that voting was futile, and reduced turnout among the Democratic party’s base, such as African-American voters.

As the New York Times notes, “The Black share of the electorate declined once again in Georgia…Black voters represented just over 27 percent of the electorate, down from 27.7 percent in 2016 and down from nearly 30 percent when Barack Obama was on the ballot in 2012.”

False Democratic vote fraud claims at the national level may also have contributed to lower Democratic turnout. As the global polling firm YouGov observes, “Two out of three Democrats” in national polls “claim Russia tampered with vote tallies on Election Day to help” Donald Trump in 2016, even though there is “no credible evidence” of that.

Gabriel Sterling, Georgia’s voting system implementation manager, said in a November press conference that claims of voter fraud and voter suppression in Georgia are false. “For the people out there who are irritated with people talking about voter fraud right now, they should be equally irritated with people who talked about voter suppression two years ago,” he said. “Both undermine confidence in the system.”

But it’s also wrong when Trump does it. The conservative National Review notes that vote fraud did not change the results of the 2020 election, which Trump lost.

Trump’s sowing distrust in voting comes at the worst possible time for the GOP. Georgia is holding two special elections for U.S. Senate seats in January, and both races are too close to call. If GOP voters believe elections are rigged, they may be less likely to vote, possibly tipping the election to the Democrats. If that happens, the Democrats will take control of the U.S. Senate.

In an ordinary political environment, the GOP would win these elections because the Democratic candidates are fairly radical. For example, Democratic candidate Raphael Warnock praised a sermon that said “God Damn America.” Warnock also “told the world that everyone needed to repent for their worship of whiteness and claimed that socialism is supported by the Bible.” Warnock also praised an anti-semitic preacher, compared “Israelis to animals,” and made remarks against the U.S. military, saying that it is impossible for anyone “to serve God and the military.”

But this year, the Georgia senate run-off elections will be very close, and the Democrats may win. Trump’s unfounded attacks on Georgia’s voting process have divided the state GOP, and Democrat Warnock leads Republican candidate Kelly Loeffler by 1% in a recent Fox News poll, which shows 49% of Georgia voters preferring Warnock to 48% preferring Loeffler. In another recent poll, Loeffler leads Warnock by a single percentage point. The Fox News poll shows the other Georgia Senate race tied, with 49% of voters supporting both Democrat Jon Ossoff and Republican David Perdue.

This sort of divisive behavior cost Trump the 2020 election. He spent more time complaining about personal grievances or raising divisive issues than pointing out the radicalism of Joe Biden’s policies or highlighting America’s accomplishments during Trump’s tenure. Advisers told Trump to talk about the American economy’s rapid rebound, rather than lashing out at his enemies, but he chose to do the latter. The U.S. economy “accelerated at a 33.1% annualized pace in the third quarter,” the “fastest pace ever,” and did much better than most world economies during the coronavirus epidemic. But Trump spent little time at his rallies talking about this.

Joe Biden has supported California’s AB5, which curbed freelance work and eliminated the positions of thousands of independent contractors. He wants to implement it nationally. No past Democratic president has supported such left-wing legislation.

Biden recently said that the filibuster should be abolished if it stands in the way of “systemic change” sought by progressives and Democrats take control of the Senate. Abolishing the filibuster would lead to a flood of controversial progressive legislation becoming law.

Biden also supports tens of billions of dollars in new government spending on racial preferences and set-asides, which the current Supreme Court views as constitutionally suspect. Biden also supports giving states a financial incentive to reduce prison populations, which could increase the crime rate over what it would otherwise be.

Obama officials who requested unmasking of Michael Flynn are now on Biden transition team
Next Post
Cartoon of the Day: Democracy dies in darkness 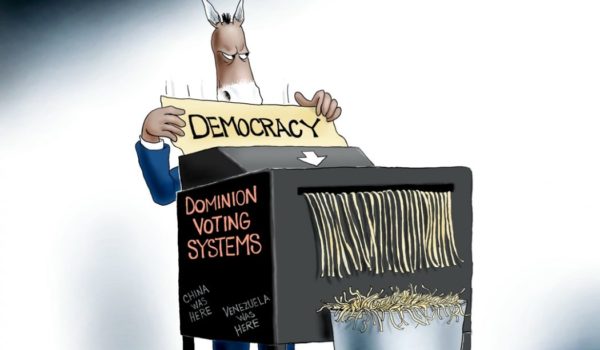