Most Republican candidates got more votes than Donald Trump did in their district or state. In Pennsylvania, where Donald Trump is currently trailing, other Republicans carried the state: Republicans won the Auditor General and Treasurer races (although the Democratic state attorney general, Josh Stein, was reelected with 51% of the vote).

Republicans did better than Trump in most of Pennsylvania’s congressional districts as well. As political analyst Harry Enten notes, “In the U.S. House races, the GOP candidates are getting 117k more votes than the Dem candidates. Fact is the prez race was just different. Lots of potential GOP voters just couldn’t stomach Trump.”

In the state of Nebraska as a whole, Trump won by 19%, but the Republicans won the U.S. Senate race in Nebraska by a margin of more than 40%. Trump underperformed the GOP Senate candidate, Ben Sasse, by well over than 20%.

In Michigan, Trump trails Biden by 2.7%, while GOP Senate candidate John James — a challenger who has never held office — trails an entrenched Senate Democrat by only 1.5%. So the GOP did better in the U.S. Senate race than the presidential race in that state.

Trump did worse than most other Republicans because he was a fairly weak candidate. It’s rare for incumbent presidents to be defeated in a re-election bid. But Donald Trump, who was unpopular throughout his term in office, ran a lackluster campaign, in which he committed gaffe after gaffe that antagonized swing voters. As a result, he apparently lost the election by a narrow margin in each of several states he needed to win.

Through his impulsive, ill-considered remarks, Trump has offended one constituency after another. Here is just one of many examples.

One of my brother’s former business partners, an Ethiopian-American, voted for Trump in 2016, after previously voting for Barack Obama twice. But he voted for Biden in 2020, after Trump suggested on October 23 that Egypt could destroy a key dam in Ethiopia on the Nile River.

As the BBC notes, “The Grand Ethiopian Renaissance Dam is at the centre of a long-running dispute involving Ethiopia, Egypt and Sudan. Mr Trump said Egypt would not be able to live with the dam and might ‘blow up’ the construction. Ethiopia sees the US as siding with Egypt in the dispute.”

As it reports, “The president was on the phone to Sudan’s Prime Minister Abdalla Hamdok and Israel’s PM Benjamin Netanyahu in front of reporters at the White House” on October 23. “The occasion was Israel and Sudan’s decision to agree diplomatic relations in a move choreographed by the US. The subject of the dam came up and Mr Trump and Mr Hamdok expressed hopes for a peaceful resolution to the dispute. But Mr. Trump also said ‘it’s a very dangerous situation because Egypt is not going to be able to live that way.’ He continued: ‘And I said it and I say it loud and clear – they’ll blow up that dam. And they have to do something.'”

Ethiopians interpreted Trump’s remarks as incitement to blow up the dam. Ethiopia’s foreign ministry said, “The incitement of war between Ethiopia and Egypt from a sitting US president neither reflects the longstanding partnership and strategic alliance between Ethiopia and the United States nor is acceptable in international law governing interstate relations.”

Trump thus antagonized Ethiopians, even though Ethiopian-Americans vote, and Ethiopia has been a U.S. ally, sending troops in to neighboring Somalia to fight anti-American Islamic militias there. There are over 100 million people in Ethiopia, and as many as 250,000 Ethiopians in America, including 12,000 Ethiopian-Americans in metropolitan Atlanta. Joe Biden seems to have carried Georgia by about 14,000 votes, so offending Ethiopians may have helped Trump lose Georgia.

Trump committed another major gaffe when — right before the election — he suggested he would fire Dr. Anthony Fauci. That was very foolish to say before the election, because the public — rightly or wrongly — likes Dr. Fauci, and approves of him by a 2-to-1 margin — making him far more popular than Trump. Trump’s talk of firing Fauci took public attention away from the economic recovery — which was a Trump strength, since the U.S. economy has fared much better than most world economies over the past year — and focused it back on COVID-19, a subject where many voters disapproved of Trump’s record (a vaccine for COVID was not announced until after the election, too late to swing the election in Trump’s favor by mitigating concern over COVID). 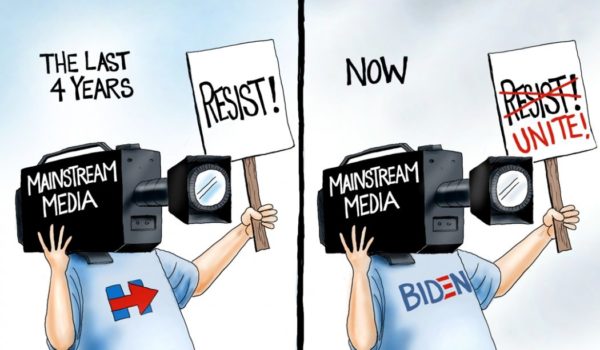 Cartoon of the Day: America’s Pravda
Next Post
Veterans Day 2020: The torch we caught, to hold it high