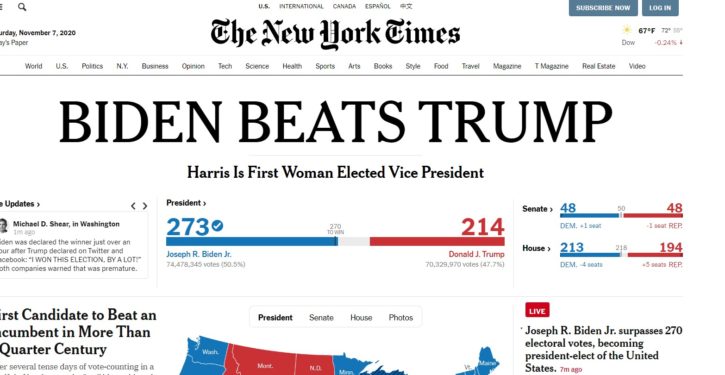 Despite reports revealing some serious miscarriages in the way the 2020 presidential election was handled, the general consensus as of a short time ago is that Joe Biden has defeated Donald Trump, becoming the 46th president.

A year and a half after launching his White House bid, Biden secured enough states to put him over the threshold of 270 electoral votes and bring an end to the four game-changing years of the Trump presidency, according to a projection from the Fox News Decision Desk. For Trump, the loss comes four years after a stunning upset – when he came from behind in 2016 and outperformed the polls in a historic White House victory against the Democrats’ nominee, Hillary Clinton.

And what of Trump’s many challenges, which are yet to be heard by the courts? According to a statement by the president, it’s business as usual. In a statement released in the last few minutes, he said:

The simple fact is this election is far from over. Joe Biden has not been certified as the winner of any states, let alone any of the highly contested states headed for mandatory recounts, or states where our campaign has valid and legitimate legal challenges that could determine the ultimate victor.

The announcement strikes us as premature as well, especially in light of the Supreme Court directive handed down yesterday that Pennsylvania segregate ballots received after Election Day from the rest. (RELATED: Impatient Dems are demanding that Trump admit defeat: A couple of problems)

Has the fat lady sung? Color us skeptical for the moment.