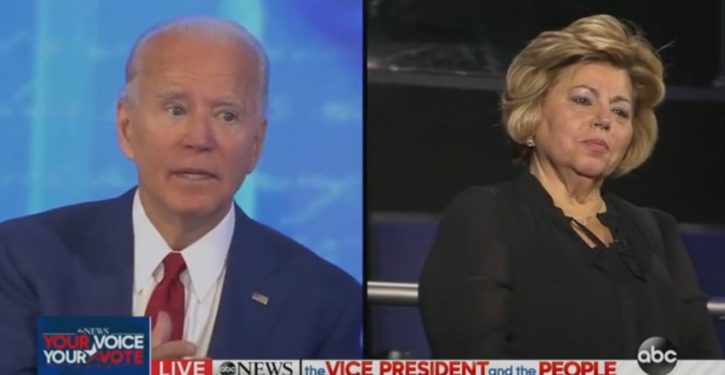 During last night’s town hall on ABC, Biden, who has suggested sending along a psychologist or psychologist with police officers “to keep them from having to use force,” reprised his recommendation from June that cops “aim for the leg” when rushed by an “unarmed” suspect “with a knife or something.” A video follows along with a partial transcript.

There’s a lot of things we’ve learned and it takes time, but we can do this. You can ban chokeholds, you can — but — but beyond that, you have to teach people how to de-escalate circumstances, de-escalate. So, instead of anybody coming at you and the first thing you do is shoot to kill, you shoot them in the leg. There’s ways — you have to do more background checks in terms of whether or not the person coming in passes certain psychological tests. And the last thing I’ll say, and I’m sorry, but it’s really, I think, really, really important, is you have to be in a position where you are able to identify — identify the things that have to change. And one of the things that has to change is, so many cops get called into circumstances where somebody is mentally off. Like what happened not long ago, that guy with the knife. That’s why we have to provide — within police departments — psychologists and social workers to go out with the cops on those calls, those — some of those 911 calls, to de-escalate the circumstance, to deal with talking them down. But we can’t — cops are kind of like schoolteachers now. You know, schoolteacher has to know everything from what — how — how to handle hunger in a household, as well as how to teach you how to read. Well, cops don’t have that breadth, and there’s a lot of things we can do. We shouldn’t be defunding cops, we should be mandating the things that we should be doing within police departments and make sure there’s total transparency. [Emphasis added]

It’s worth noting that George Stephanopoulos, who was emceeing the debate, didn’t bother correcting the misinformation.

When Biden first recommended this “technique” in police reform, no doubt culled from misspent nights watching grade B movies, the “experts” he claims to hold in such high esteem lined up to tell him why his advice was hopelessly misguided.

Connor Narcisco, a combat medic in Afghanistan and husband of an emergency room provider at Johns Hopkins Hospital in Baltimore, noted the grave risks associated with striking the femoral artery, which runs down the thigh and supplies oxygenated blood to the leg. Bleeding out is a very real possibility in the event of such a wound.

Then there’s the matter of accuracy. As Jeffrey Denning of the Deseret News notes:

No doubt Biden will offer his home-spun advice again before the election, but God forbid he gets to be president and signs an executive order mandating his deadly prescription.

Senate to subpoena Twitter CEO over blocking of disputed Biden articles
Next Post
That was quick: Judge in case of Devon Archer associate Cooney, who turned over emails to journos, is spouse of Mueller prosecutor 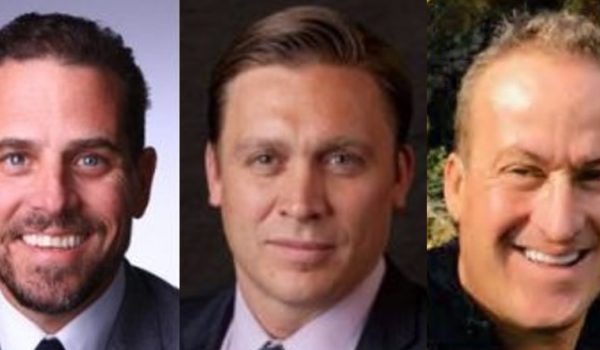