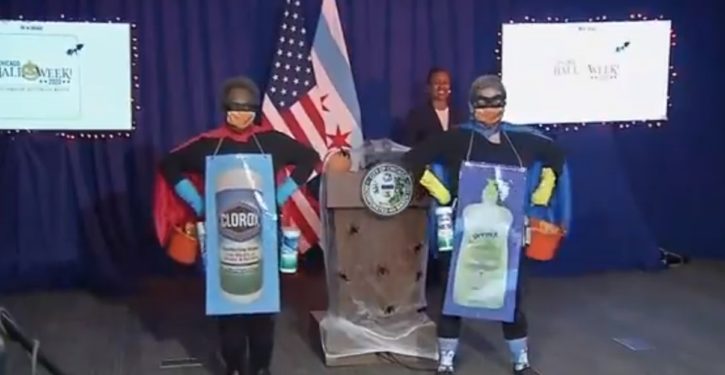 There’s a real danger of overthinking and over-researching this.

This particular public official presides over a city with one of America’s highest rates of homicide, shootings, and assault.

But it’s October 1, and she decided to show up in a formal briefing venue as the red-caped, black-masked Rona Destroyer.

She wears a placard hanging down the front with a photo of (apparently) a Clorox wipes container on it.

Her faithful sidekick in the purple cape appears to have a placard featuring hand sanitizer.  (It may be hand soap.)

Lightfoot and her henchwoman carry what may be Halloween buckets.  They’re orange, at any rate.  Lightfoot dispenses hygienic goodies from them.  She’s probably about to announce rules or restrictions for trick-or-treating in the metropolitan area at the end of the month.  Wild guess.

The narration can probably be dispensed with at this point.  It’s Mayor Lori Lightfoot of Chicago.  According to Wikipedia (remember, no fair over-researching), she had a 78% approval rating in a survey of likely voters done in June 2020.  Apparently the citizens of Chicago are getting what they voted for.