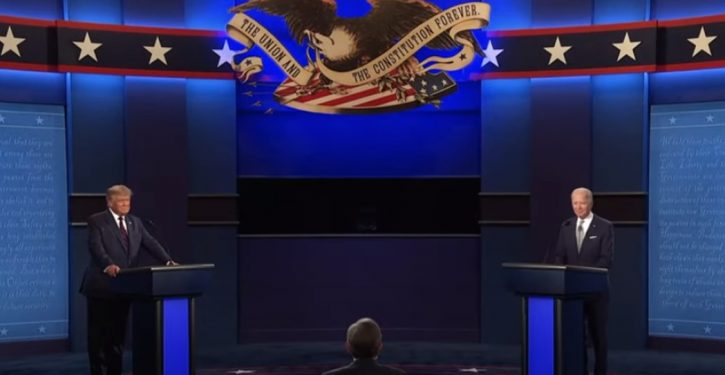 Hoping everyone watched the debate in his or her own cozy domicile or other appropriate accommodation.  No one is up to the task of chronicling tonight’s performance.  The scribes of the Old Testament Chronicles themselves would throw up their hands and say, “You’re on your own, dudes.”

… and ended up as the, er, fight scene from Blazing Saddles.

A few observations, starting with order of importance.

1. Trump scored policy points.  He was able to make himself heard over the din, and used his “heard” time to make actual points, as opposed to regurgitating Daily Beast-approved ad hominem characterizations of his opponent.  Biden did only the latter when he had a rare uninterrupted period of talking to himself.

Trump didn’t make his points in an elegant way, but he made them in an effective way.  The human psyche hasn’t changed so much that it doesn’t recognize a guy waving aside tone, form, and nyaah-nyaah blabber, and just pounding out understandable points.  Voters will remember what he said about the economy, vote-by-mail balloting, law and order, and Antifa — whether they love what he said or hate it.

2. Chris Wallace couldn’t have been more obviously on Biden’s side.  Wallace basically framed all his questions in the terms of New York Times and Washington Post editorial polemics.  My impression was that both Trump and Biden did about an equal amount of interrupting; I don’t think Biden did more than Trump, or vice versa.  (Trump is louder, so that may have colored some perceptions.)  But as a moderator, Wallace stepped in consistently to save Biden, and consistently to cut off Trump.

It wasn’t Wallace’s job to cut Trump off in the middle of making points Wallace obviously didn’t like, such as that there are serious election security issues with mass-mailed ballots.  None of the sponsors or administrative participants in a presidential debate is responsible for what the candidates say.  But what they do have is an affirmative responsibility to let the candidates say what they mean and what they want to.  That is what the voters need to hear.  That’s how they come to know and evaluate the candidates.

3. Following up that last point, what we learned about Biden is that he spouts a mishmash of incoherent talking points, mainly comprising the same accusations against Trump that the media make day after day.  Now and then he wandered into bizarre areas, such as undermining his party’s entire platform on the policy issue of “the suburbs” by pointing out that they are already much more integrated than they used to be, and any racism in them has plummeted dramatically — and then polishing that counter-policy point off with a cracked-throated cry that people in the suburbs “are DYING of COVID!”

Huh?  People in the biggest cities have died of COVID-19 at rates that have at times been a real source of anguish.  But by no comparison or standard can anything like that be said of people in the suburbs.

We learned about Trump that he doesn’t suffer gladly being the target in a 2-on-1 debate; that he’s louder and more energetic than Biden, but about equally inclined to interrupt; that he picks his battles (e.g., he never even addressed the canard about “very fine people,” once again repeated by Biden); that he intends to establish that he will choose when and when not to talk back to the moderator (audience orientation to that point may vary); and that he just keeps coming back to his points until he gets them out.

4.  Social media universally hated Chris Wallace’s performance as moderator.  To my eyes he was clearly biased (see point 2 above), but I think his real failure was in trying to establish head-to-head mastery over Trump.  That was a tactical error.  It came across as stemming from inability to adapt, and probably from some ego as well.  He could have gotten cooperation better with a less preachy approach.  This debate wasn’t about Wallace or his reaction to Trump; it was about giving the American people an opportunity to hear from the candidates.

5. Speaking of which, although most viewers seemed to be in physical pain by the end of it, the truth is that we did get to hear from the candidates.  As is usual with the human species, we didn’t hear them as they are; we heard them as we are.  For some segment of viewers, that meant the agony of the noise drowned out everything else.  We’re all made differently.

But I suspect Biden gratified many by affirming their favorite talking points against Trump, such as that Trump ignores science, he killed 200,000 Americans, he’s a millionaire and billionaire who only paid $750 in taxes, and everybody hates him, and hates us because of him.

Biden would not have gratified his far-left constituency by skedaddling away from the Green New Deal, per se (he hastened to say he has his own plan), or by hedging his bets on how much he likes law and order (he doesn’t seem to hate them enough).  But he did a fine job with the “Antifa is an idea, not an organization” line, and he got in a good 30-second rant on how racist and really racist and irredeemably racist America is, and Trump most of all is.

Trump spoke of what he regards as accomplishments: eliminating the Obamacare insurance mandate, keeping preexisting conditions covered, creating jobs, imposing the virus-related travel ban and minimizing the spread of the coronavirus in the U.S., reacting with a quick ramp-up of PPE production and distribution, cutting tax rates, getting judges confirmed to the federal bench, and a number of other items.

Trump also had a defining 30-second opportunity to speak uninterrupted about teaching younger generations to know American history and love the country.  Shriek as you will; that got through, and it will resonate.

Trump was combative about being attacked, but actually said little about Biden himself.  He got in digs about the questions surrounding Hunter Biden’s activities in China and Ukraine.  He rammed through a point about Hunter’s discharge from the Navy that many will presumably, and understandably, find unnecessary, at the very least.  He got in points about the hazards of mass-mailed ballots (which he correctly points out are not the same management problem as vote-by-mail ballots requested by individual voters).  On a handful of other points, including law and order, he left an articulable impression.

Biden was less likely to leave an articulable impression on defined issues — other than confirming his orthodoxy on left-wing talking points.  What we knew by the end of the debate was what each candidate thought it was important to say.  In an unusually prohibitive environment for Marquis-of-Queensberry debate, they both managed to establish that.  They did what matters.

It’s worth remembering that in America’s first 130-odd years under the Constitution, many a stump debate between political candidates saw fistfights in the crowds turn into brawls by the end of the day.  We’ve been accustomed throughout my entire life to a more polite, decorous style.  But consensual republican government and freedom of thought and speech survived those contentious, less refined conditions of frontiers and primitive settings, raw young cities and mass labor contingents, a fractious, polemical press and politicians who as often as not cultivated votes with free-flowing kegs of whiskey.

So calm down.  The real threats to the essential marriage of consensual government and freedom are political correctness, institutional intolerance of dissent, and the mandatory affirmation of orthodox political catechisms.  My main impression from the debate is that in terms of embodying those quantities, one figure wins, hands down: Chris Wallace.