It has a name — the Kamala cackle — and whether you are a fan or foe, it is becoming one of the Democratic VP candidate’s most distinguishing traits. It’s not only the laugh that is drawing attention. It is also the trigger. Which is to say that the former California attorney general laughs at the strangest things.

One of the most peculiar instances of the Kamala cackle came last June, when late-night host Stephen Colbert asked her how she could entertain the possibility of being Joe Biden’s running mate after her emotionally charged attack on him during the debates over the subject of busing. Harris responded, “IT WAS A DEBATE!” — aka all an act — before collapsing into comedic near-hysteria, only to be joined by Colbert.

It happened again last night, when she was expounding on one of the chief difficulties the COVID-19 pandemic presents for parents. “And one of the biggest dilemmas for any of us as a parent is what to do about our kids in school, K-12, college, all of that. And we all want them to go back to school. Right? But safely.” Before the entire sentences had passed her lips, she dissolved into a serious case of the giggles.

There have been other times. Back when she was San Francisco district attorney in 2009, she had a good yuk over the prospect of jailing parents of truant children:

Another rib-ticking moment for her came when she was asked by TV host Ellen Degeneres who she would find the most tolerable to be stuck in an elevator with from a field that included Donald Trump, Mike Pence, or Jeff Sessions. Her response — “Does one of us have to come out alive?” — was followed by gales of laughter, joined by the audience and her host. 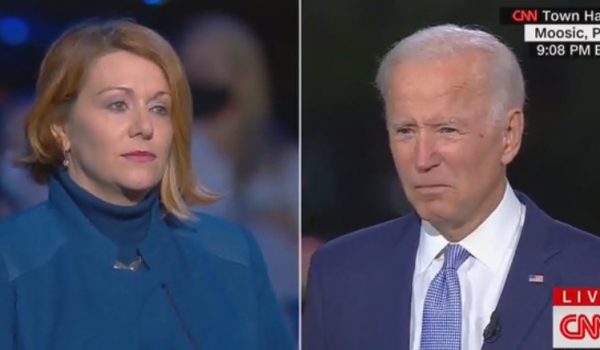