A bail fund promoted by Sen. Kamala Harris helped a man accused of sexually assaulting an eight-year-old girl get out of jail in July, according to court documents obtained by the Daily Caller News Foundation.

The Minnesota Freedom Fund (MFF) also helped post bail in August for a man accused of assaulting a 71-year-old woman as he burglarized her home, court documents show. One week after his release the man was found to be in violation of his bail. The Hennepin County Sheriff’s Office told the DCNF on Wednesday there is still an active felony warrant out for that man’s arrest.

Court documents reviewed by the DCNF reveal that the bail fund also provided support in June to a man who allegedly stomped on and robbed a victim on the streets of Minneapolis on May 25, the same day George Floyd died while in police custody.

During the nationwide wave of protests and riots following Floyd’s death, Harris, the Democratic vice presidential nominee, called on her followers to donate to the MFF in a June 1 tweet. The California senator said contributions to the fund would “help post bail for those protesting on the ground in Minnesota” against Floyd’s death.

The fundraising page Harris linked to in her tweet, which contains her picture and the slogan of her former presidential campaign, was still actively accepting donations as of Wednesday. (RELATED: Kamala Harris Continues To Support Group That Bails Out Suspected Violent Criminals)

The MFF has struggled to spend the $35 million it received following Floyd’s death. The group revealed in early September that only about 6% of the $3,475,000 it has spent since Floyd’s death had gone to help bail out of jail people facing protest-related charges.

At least 13 staffers working for Joe Biden’s presidential campaign also donated to the MFF in the first week following Floyd’s death, according to Reuters.

The Biden campaign and Harris’s Senate office did not return multiple requests for comment asking why she continues to actively fundraise for MFF. Neither the campaign nor Harris have publicly addressed her continued support for the bail fund.

He ‘put his thing inside me’

Timothy Wayne Columbus, 36, faces up to 30 years in prison for allegedly sexually assaulting an eight-year-old girl in 2015, court records show. He was released from a Minneapolis jail in early July on $75,000 bail, according to jail records.

One day after his release, Columbus signed a document asking the court to return any refunded bail to the MFF, indicating that the fund played a role in securing his release from jail, a court document obtained by the DCNF shows.

“Victim stated ‘Tim’ laid her on the couch and held her down as he unbuckled his pants and pulled down her pants. Victim stated he then ‘put his thing inside me,’” the statement of probable cause read.

“Victim stated ‘Tim’ told her not to tell anyone and continued to penetrate her,” the statement added.

Columbus was considered a friend of the victim’s family but had abruptly stopped visiting the family around the time of the alleged assault, the statement said. The girl did not tell anyone about what happened until years later, according to the statement.

Columbus confirmed to police prior to his arrest that he knew the victim, but he denied that he abused the girl and said she “always really liked him,” the statement read.

Columbus was a registered predatory offender for a separate incident prior to his arrest in June, according to the statement. A registered sex offender also received support from the MFF earlier in the summer.

Fox9 reported in August that the group paid $350,000 in cash to release twice-convicted rapist Christopher Boswell from jail. Boswell currently faces charges of kidnapping and sexual assault, according to the outlet.

Richard Raynell Kelley, 53, faces 20 years in prison on a charge of burglary and 1st-degree assault for allegedly breaking into the home a 71-year-old woman in April in violation of an active order of protection, court records show.

After the woman, who identified herself to police as the alleged assailant’s mother, confronted Kelley about why he was at her home, he allegedly grabbed her shoulders, pulled her down from her stairs and began “punching and kicking her in the ribs, back, and right eye,” according to a statement of probable cause.

Kelley then allegedly taped the woman’s ankles and wrists together at the foot of the stairs and “proceeded to run up and down the stairs multiple times, stepping on Victim each time he passed her,” the statement read.

Next, Kelley allegedly told the woman he was going to kill her, but instead, he proceeded to make food inside her house and sat on a couch “where he could keep an eye on Victim, who was still laying, duct-taped, at the bottom of the stairs,” according to the statement.

Kelley fell asleep on the couch twice while keeping an eye on the woman, the statement alleged. It stated that he left the house after he woke up the second time and observed that the woman had managed to move herself from the staircase to her kitchen and was in the process of cutting the duct tape from her wrists with a blender blade.

The woman waited three days after the assault to call the police because she was scared to leave the house due to the coronavirus outbreak, according to the statement.

The woman had a swollen eye and bruises on her chest, shoulders, back and legs when officers arrived at her house, according to the statement, which noted that the officers also observed a “pool of blood” at the foot of her staircase.

Kelley was arrested and released from jail on $4,000 bail on Aug. 10, according to court records. Kelley signed a document the same day requesting any refunded bail money to be returned to the MFF, according to a court document reviewed by the DCNF.

One week later, on Aug. 17, Kelley was found to have violated his bail terms by not complying with electronic home monitoring rules, according to a court document reviewed by the DCNF.

The Hennepin County Sheriff’s office told the DCNF Wednesday that there was still an active felony warrant for Kelley’s arrest.

The MFF did not return multiple requests for comment.

Kelley is the second known suspect released from jail with MFF’s help since Floyd’s death found to have violated his bail terms.

The fund bailed out Lionel Timms from jail in late July in relation to a third-degree felony assault charge he faces for allegedly assaulting a person on a bus on July 11, according to Alpha News. Timms was arrested again while out on bail for allegedly assaulting a respected bar manager, who according to Alpha News, was left with a traumatic brain injury.

MFF Interim Executive Director Greg Lewin issued a statement in response to Timms’s second arrest in late August, saying his arrest while out on bail was a failure of the criminal justice system.

Deshaun Jermain Boyd, 33, was released from jail on $70,000 bail in early July after he was charged with first-degree aggravated robbery, court records show. He has since pleaded guilty and faces a maximum of 20 years in prison, according to the records.

Boyd, without warning, allegedly assaulted and robbed a man who was leaning on a cane on May 25. Boyd and another suspect knocked their victim to the ground, then proceeded to repeatedly kick and punch him, according to a statement of probable cause filed by Minnesota prosecutors.

As the victim “attempted to shield his face and body from the repeated blows,” Boyd and his accomplice “started to stomp” on his head, according to the statement.

Following the assault, Boyd and his associate returned to the victim and stole the contents from his pockets, the statement reads. They were arrested by police a short distance from the scene.

Boyd signed a court document a few days before his release in late June, requesting that any refunded bail be returned to the MFF.

Boyd pleaded guilty to first-degree aggravated robbery in late July and is scheduled to be sentenced in late September, court records reviewed by the DCNF show. 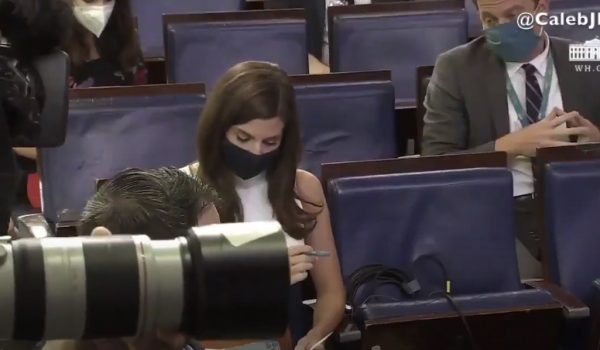 CNN reporter scolds Trump over face mask, then removes hers when she thinks cameras are off
Next Post
DOJ memo eyes sedition charges for rioters