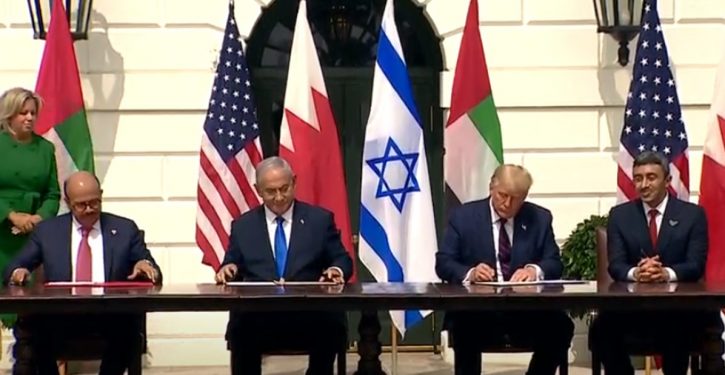 In defiance of social media, which are busy squashing the “Abraham Accords” signing as a trending topic, the world witnessed today possibly the most remarkable development in the last 100 years or more.  Israel, the United Arab Emirates, Bahrain, and the United States signed a set of accords expanding peace between the Arab world and Israel beyond the late borders of war.

These accords are different from the ones between Israel and Egypt, and Israel and Jordan.  Those earlier accords, pioneering and necessary, solidified decisions made to halt the animus of war across contiguous borders.  They were signed because there had been war — land war, across disputed terrain — and the formal protocol of peace agreements could stabilize the peace, and give the combatants and the region breathing space for hope and prosperity.

But today’s accords are something new.  They are not signed to punctuate the ending of a land war.  They are signed to inaugurate a better peace.

As UAE’s Foreign Minister Sheikh Abdullah bin Zayed al Nahyan said during the ceremony, representing President Sheikh Khalifa bin Zayed bin Sultan Al Nahyan, they signify “a change in the heart of the Middle East.”  These are words it was up to the Arab nations to say.  Today, the UAE spoke them, and Bahrain concurred.

The formerly intractable regional schism is not, of course, fully healed.  During the ceremony at the White House (video below), Iran’s client Hamas launched rockets into Israel from Gaza.  Iran is furious at this development, already spreading to Bahrain, and beyond the Middle East to the Balkans, and probably soon to Northern Africa.  Turkey is none too happy.  The EU is petulant and unenthusiastic to the point of simply ignoring it (although Hungary planned to have the foreign minster at the signing ceremony).

Some read the EU stance as constituency-tending, given the large and growing demographic of Muslims in Europe from all regions and backgrounds.  No doubt, radicalized elements of that population are prepared to foment increasing unrest on any pretext.

But I think much of the Muslim population of Europe is ready to adopt the more conciliatory, hopeful posture of the Arabs and other Muslims in their countries of origin.  The real problem in the EU is its cultivation of Iran.  Iran, under the leadership of “revolutionary” radicals, is why the EU is standing off from today’s signal, unprecedented, and — yes — tectonic development.

(The First Lady arrives about 11:30 in the video.  The ceremonial action begins shortly afterward.)

Just a few observations.  One, this is indeed the work of the Trump administration, a result in good part achieved by laying ground work that goes far beyond diplomacy with a few Arab nations and Israel.  Conditions in the Middle East required shaping to make this possible.  I know many readers will be gratified to think that Trump’s stance on reducing troop presence is a key point, which it is.  Reducing the footprint of U.S. troops — ground troops, specifically, not the Navy or even so much the Air Force — is a form of release to the peoples of the region to seize responsibility for their own destiny.  The presence of outside troops is a substitute, and a poor one, for that better condition.

It is a rare great power that executes such a release.  It couldn’t be done if the territorial posture of ISIS had not been eliminated as a factor.  Without ISIS, Iran has no excuse for marauding about Syria and Iraq, and Erdogan’s Turkey has no radicalized, centrally coherent client inside Syria to stoke with under-the-table cooperation.  The visions of conquest in Tehran and Ankara (or let us say, more accurately, in Qom and Istanbul) have been dealt what may well — if perhaps not immediately — be a fatal blow, or at least a stunning one for some time to come.

Many factors went into preparing for this day.  Blogger and Internet sleuth Brian Cates had an excellent Twitter thread on it a few days ago, which better systematizes similar thoughts I have had, and in the interest of brevity I offer that for your perusal. It’s well worthwhile as a thinking aid.  (Click through for the full thread.)

The question arises, of course, how long a trend like this will hold.  It’s a good question, but the answer must obviously not be the one we would have given 20 years ago.  The accord with the UAE and Bahrain could not have happened 20 years ago.  Too much had to change first.

It might seem that the proximate threat of Iran has been the biggest change, with Iranian arms (some by proxy) present not just in Lebanon but in Iraq, Syria, and Yemen.  But it’s worth remembering that revolutionary Iran has had a growing forward presence for many years, radicalized and increasingly alarming to the region, stretching from Pakistan and Afghanistan to Morocco.  Revolutionary Iran in fact became a reality at the same time Israel and Egypt signed their landmark accord in 1979.  Iran is closer now to obtaining a bomb, but exactly as close as the mullahs in leadership have always been to seeking revolutionary disruption for the whole region.

No: although Iran is naturally a factor, we mustn’t dismiss what FM Abdullah bin Zayed framed it as.  “A change in the heart of the Middle East.”  That it is that, no one can doubt.  Too much has changed in the last few weeks — at the deckplate level; the Saudis allowing overflight for air traffic to and from Israel and all destinations, Arab delegations openly heading to Israel for routine diplomacy, UAE hotels incorporating kosher cuisine options, Israel bestowing a Judaic artifact on Bahrain as a token of goodwill — for us to insist this is a mere meaningless display.

One thing that should tell us this is profound and significant is the level of distracting noise and the seemingly unrelated baffles being thrown up around it.  The paroxysms of civilizational shrieking in the EU and the Anglophone West ought to be information for us.  Likewise the alarming belligerence of China, and to some extent Russia, in recent years.  If there were less to worry about as an existential matter in the streets of Western Europe and America, we would accord the UAE-Israel-Bahrain agreement more fascinated attention.  But it would also have been fought harder — if the forces of global fury and hatred were not so absorbed in trying to take us down.

Those forces need to take us down — America; the United States (and, I still believe, one election hence, Canada), Australia, and as much of Europe as will straighten up and fly with us; the stalwarts of moderation in the Far East, Japan and South Korea, Thailand, the Philippines, Indonesia; the great nation of India; the continental, hemispheric leaders of Nigeria, Kenya, South Africa; Mexico, Brazil, Argentina, Chile — in order to expose the Middle East to explosive vulnerability.  While the hostile forces have been preoccupied with this takedown campaign, the heart of the Middle East has changed.

Not everyone can hear that the Lord works in mysterious ways.  So be it.  Pax vobiscum; see it according to your lights.  The willingness of all parties to call today’s signed instruments the “Abraham Accords” tells its own tale.  Christians would see it as both of the natural children of Abraham, Ishmael and Isaac, and Abraham’s spiritual descendants, the “Gentile” followers of Jesus Christ, uniting to share, in peace, a heritage previewed in the book of Genesis.  There can be no doubt, given the character of the Americans involved in the deal, that the vision encompasses all these features.  There can also be no doubt that all parties are equally willing and uncoerced.

As for other prophecies, they are not ours, but for the Author of Creation to work out.  Our task in the U.S. is set for Sunday, 20 September 2020, when the sanctions on Iran snap back according to UNSCR 2231 and the JCPOA of 2015.

Israel will celebrate the new year, Rosh Hashanah, and the ensuing high holy days, starting on Friday evening.  For Jews and Israel, the new year will be 5781.

For the Muslims of UAE, Bahrain, and the rest of the Islamic world, the year is 1442.  We might have a few kinks to work out in the sharing of a heritage, but things are moving in a promising direction.  Something remarkable to note is that the Muslim new year, which rolls back against the West’s Gregorian calendar because the Islamic year is a few days shorter, is calculated from the date in (Gregorian) 622 when Mohammed is said to have performed the Hijra from Mecca to Medina.  That date, on the Gregorian calendar, was 20 September.

God’s ways are not our ways.  Where this goes will be by His leading.

This is the Lord's doing, and it is marvelous in our eyes.

Discredited dossier used to investigate Trump cited by FBI despite ‘crazy’ behavior of its author
Next Post
Adam Schiff’s ‘Whistleblower’ 2.0 at DHS keeps getting into a weird area