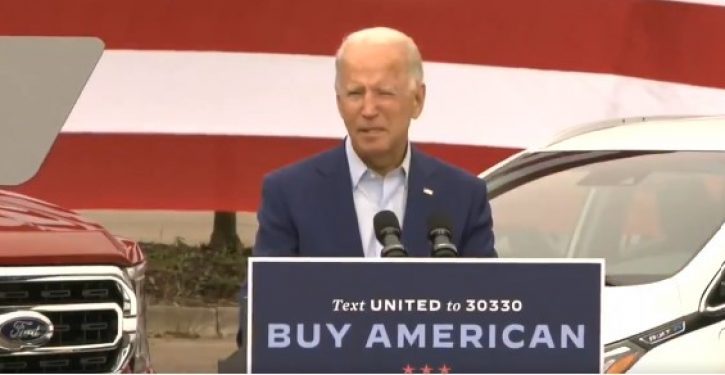 Do you remember the TOTUS? Short from “Teleprompter of the United States” and riffing on POTUS,  the acronym was popularized during the Obama presidency, arising out of his overuse (abuse?) of that visual aid. Obama’s dependency was so great that even the normally left-leaning Politico felt impelled to take a few jabs at the then-president.

After a brief hiatus, that crutch is back. This time its exploiter is Obama’s second in command, who, like his boss, can’t go anywhere without it, including press conferences. But unlike his old boss, Joe Biden can’t quite find the “on” switch. (RELATED: Nope. A teleprompter isn’t the answer to Biden’s gaffe problem)

This became evident again at a campaign stop outside of Detroit. Standing for some reason in front of half a dozen cars and a giant American flag, giving anyone tuning in the impression Biden had given up his presidential aspirations to become a used car salesman, he said this:

Can I get a translator please? 😂😂😂 pic.twitter.com/BZ8teR040z

Things didn’t get any better for the Democratic nominee when he switched venues, addressing a rally in a Detroit high school gym. The purpose of his visit — to unveil plans for new manufacturing — got lost when attendees confronted him about his job-killing vote on NAFTA:

He was later asked by a local reporters about his support for retaining NAFTA and gave a nonsensical answer in which he blamed George W. Bush:

Previous Post
Are Trump voters playing it close to the vest again this election?
Next Post
Can ‘metajournalism’ save old media — and unmask Trump?