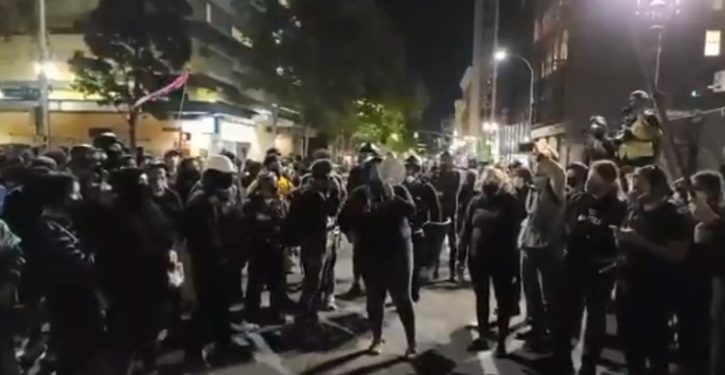 Things are beginning to heat up on the streets of America’s cities.  And barring a pace-slackening we have no reason to hope for in 2020, this trend is likely to worsen quickly.

Only a few days ago, 17-year-old Kyle Rittenhouse, apparently trying to defend himself while acting – seemingly without supervision – in an armed-civilian protection role during the riots in Kenosha, Wisconsin, shot and killed two of the rioters.  (I’ll defer criticism of allowing a minor to act in this capacity to another time.  I think very poor judgment was exercised by multiple people here, but Kyle Rittenhouse is not a hardened scoundrel or “violent extremist.”)

On Saturday, in Portland, a man in a Patriot Prayer caravan, reportedly wearing a Patriot Prayer hat, was shot and killed.  Given his Patriot Prayer affinity, he is assumed to be a Trump supporter.  (See images.)  The Portland Police are still looking into the shooting as of this writing.

A Trump supporter who participated in the Portland caravan rally was shot & killed in downtown Portland. Antifa & BLM extremists physically blocked them on the road & threw projectiles. After the man's death was known, antifa celebrated & danced. https://t.co/Pk3QpjMbeQ

If the facts hold up from the initial AP story this has reached a new level. Trump supporter killed by Portland protesters. Imagine if the roles were reversed. pic.twitter.com/zPkDpmgVVf

Some on-scene reporting identifies as the shooter a man being called an Antifa rioter.  The victim has been identified as Jay Bishop (real name Aaron Danielson).

Worth noting about the tentatively identified Portland shooter (there’s been more than one, and I’m not posting anything directly here because we don’t know for sure): he isn’t wearing the characteristic all-black clothing of the organized Antifa, BLM, and other black-bloc agitators.  If he’s the shooter, there’s a good possibility that he isn’t dressed in all black because he didn’t want to be too readily identifiable as Antifa.  I’ve seen two potential IDs so far, in fact, and neither man is dressed in the Antifa manner.

let's hang out not 👎🏿👎🏿👎🏿👎🏿 RT @livesmattershow: After a Trump supporter was killed tonight by gunfire in Portland

That last point makes a nice segue into the primary reason for this post.  It’s essential to recognize that what’s happening around us cannot be properly explained with one-dimensional thinking; e.g., if someone who’s rioting with Antifa and shoots a Patriot Prayer rallier isn’t dressed like Antifa, that means he’s not Antifa.

It doesn’t mean that.  It’s possible that that will turn out to be the case.  But the people organizing to riot night after night, coming with arsenals and props and their own food-service coaches, aren’t doing it for giggles, with no thought to where it’s headed.  They have a goal.  They have, in fact, thought about tactics, strategy, next steps and consequences.  They have done so; it’s others who haven’t.

All of that is the set-up for the main point.  Which is this: too many commentators are missing the real significance of the last few days.  They are looking at the media’s sudden about-face on the riots – shifting from refusing to name them to actively condemning them – and accepting the narrative that this is about “internal polling” on American sentiment toward the riots.

I’m afraid that’s one-dimensional thinking.  We can’t afford it.  We have to think faster than that.  We have to think faster because the behind-the-scenes thought leaders of the rapidly-transforming Democratic Party already have (as have many in the mainstream media).  I’m sure there are still many Democratic voters, and party workers at the county level, who are only dimly aware of what’s going on.  But the Democrats have become too radicalized at the national level for us to assume they’re clueless about the role of Antifa and other black blocs – whom Democrats continue to enable – in a socialist “revolution.”

The Democrats’ turn on a dime, from ignoring the riots to condemning them, occurred within a couple of hours of one event: the shootings by Kyle Rittenhouse in Kenosha.

That’s the event the radical playbook was waiting for.  That was the event that opened the narrative to the prospect of a two-sided street war, with actual pushback and violence coming from the “other side.”

A Trump supporter was targeted and killed last night in Portland.

Portland Mayor @TedWheeler is blaming President Trump and his supporters.

This is absolutely unreal. pic.twitter.com/OjOaFx31nK

Up to then, there was obviously nothing two-sided about what was going on.  On one side, arson and looting and vandalism, shrieking and intimidation and destruction, taunting of police and waylaying of innocent bystanders.  On the “other side,” tears and anguish, as lives were upended and livelihoods burned to the ground.

But once Kyle Rittenhouse had fired his first shot, the Left had something to condemn that could be said to involve “violence” from the “other side,” and could be characterized as a two-sided outbreak of vicious extremism.

They were waiting for it.  Most observers probably didn’t realize that’s what they were waiting for.  But it bears some resemblance, albeit superficial at the moment, to the pattern of provocation and retaliation that defined the street war of Soviet-backed “international socialists” versus “national socialists,” or Nazis, in the Weimar Germany of the 1920s and early 1930s.

The Stalinist “international socialists” are the side Antifa affects to carry a banner for.  The Weimar Republic street war is their touchstone: the world-historical conflict they take as their model and inspiration.

Antifa’s orthodoxies and slogans uniformly mirror those of Stalinism in the 1930s.  One of the chief ones is that their purpose is to oppose fascist, heretical national socialism – which must exist, in their now somewhat tautological thinking, because they do.

There are no organized Nazis in the U.S. on the scope and model of Hitler’s horde, however.  So the media, and prominent cultural figures on the Left, and even a number of supposedly moderate Democrats are going to start a campaign of lying – literally lying – to proclaim that there are.

The sudden Democratic condemnation of the riots started at the exact moment they had the slightest pretext to do this.

We can hope we still have this going for us: the pattern of self-exposure we keep seeing over and over with each new tack the Left tries.  They’re not getting away with it, because they’re not deceiving much of the public now.  For months, it’s been like watching a toddler trying to manipulate an adult and being caught repeatedly with his hand in the cookie jar and an oopsie in his Pull-Ups.

But even if the intent to manipulate and deceive is still blatantly obvious, the fact is still that shooting has started.  That makes it more dangerous than laughable.