The Democrats ignored the 800-pound gorilla during their convention last week, perhaps banking on the possibility that hating on Donald Trump would be enough to divert voters’ attention. It wasn’t, according to poll from the Pew Research Center that indicates that violent crime is a major issue among voters heading into the 2020 presidential election.

A sizable 59% indicate that violent crime, which Trump has framed truthfully as happening in Democrat-controlled cities, is a “very important” factor in casting their ballots.

Violent crime ranks just a shade behind the coronavirus pandemic in terms of importance, but well behind the economy, a category in which “the Republican Party holds a 9 percentage point edge over the Democrats.”

News that American voters are more concerned about violent crime than alleged racial inequality, economic inequality, and climate change will certainly come as a surprise to the Democrats, who failed to address rioting in the streets at last week’s party convention.

In fact, they pushed their radical anti-police agenda even further to the extreme.

One panelist at the Democratic National Convention (DNC) called to abolish the police. More than that, they called for a complete end to law enforcement – from the police, to ICE, to prisons in general.

Meanwhile, Joe Biden has said he would “absolutely” divert funds from police because some have “become the enemy.”

“These days, Democrats are profoundly uncomfortable talking about the rise in violent crime in many major cities,” writes Josh Kraushaar of the National Journal.  “It went unmentioned throughout the four days of their convention, even as it’s growing in importance for many voters.

The poll results come amid a dramatic spike in violent crime in major U.S . cities – many prompted by Democrat-encouraged riots. It turns out the average voter isn’t a fan of random beatings, killings, and arson, whether in the name of social justice or otherwise.

Who knew? The media have been telling people these “protests.” which include attempts at burning down businesses and cities, are historic and akin to the American Revolution.

The Wall Street Journal notes that the country’s largest cities have all seen a massive spike in murders – a 24% increase this year so far over 2019.

President Trump, by contrast, has consistently denounced the violence. “The mayors and governors of these states and cities have an absolute duty to use all resources necessary to end the violence and all of the injury and death,” he declared.

Trump is poised to paint a picture of the difference between Republicans and Democrats on violent crime during the Republican National Convention (RNC).

He needs to show the American people how his administration will work with states and cities to get the rising violent-crime wave under control, and why Biden will only exacerbate the problems.

Revenge of the ‘Normies’
Next Post
Cartoon of the Day: Bearing false witness 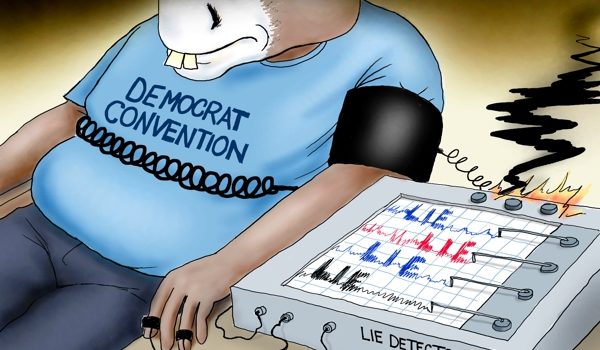