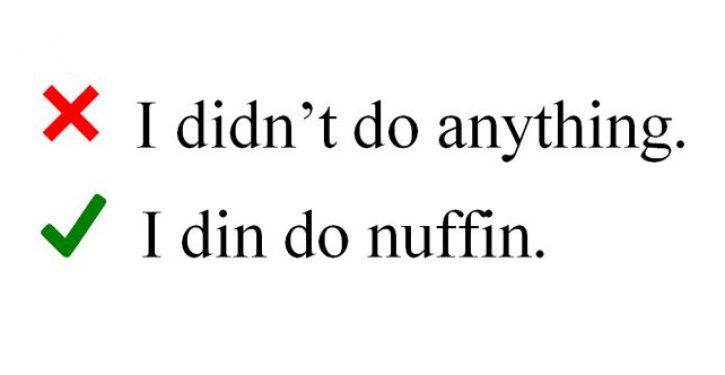 The College Fix reports that a subcommittee within the Conference on College Composition and Communication (CCCC), which is itself part of the National Council of Teachers of English, is demanding that American teachers “abolish standard English” (aka, “White Mainstream English”). One question: Isn’t referring to the English currently used in classrooms as “standard” a concession to the fact that the alternative they are militating on behalf of is non– or substandard?

But I digress. The group has published a manifesto that enumerates their five demands titled “This Ain’t Another Statement! This is a DEMAND for Black Linguistic Justice!” Oh, I would see what you did there, CCCC! You used ain’t instead of isn’t to see if we were paying attention. Nice!

Here’s the document with capitalization and punctuation preserved from the original:

Black dispositions are centered in the research and teaching of Black Language!

I don’t have a problem with people learning about their culture and any language with which it may be associated. I learned about Yiddish or what some in my family called the mamaloshen (mother tongue) growing up. But when we get into a mixed society, everyone has to agree speak a common language, or it’s the Tower of Babel all over again.

In addition to which, are white teachers and students really expected to learn that the “correct” spelling of can’t is cain’t (which is how the CCCC spells the word in an alternate title to its manifesto “Why We Cain’t Breathe!”)? What’s more is that not all black speakers follow the same linguistic rules as other black speakers. We learned from the Trump impeachment fiasco that Rep. Val Demings pronounces the plural of the word text as though it is spelled “texes.” Other black speakers pluralize the word differently in their speech. Whose idiolect becomes the new normal?

The bottom line is that this latest bit of liberal lunacy creates more questions than it answers.

Cross posted at The Lid in altered form. Howard Portnoy contributed to this report.

Ballot drop boxes are emerging as a vote-by-mail alternative — but they have critics, too
Next Post
Virginia plans mandatory COVID-19 vaccinations for all residents