Joe Biden, who is currently peddling the fairy tale that he was always regarded as one of the most liberal members of Congress, has a 47-year history in government that belies that. Back when Biden was the candidate non grata in the race for the Democratic nomination, CNN’s Jeff Zeleny reminded readers that Biden was a vocal opponent of “sending white students to majority-black schools and black students to majority-white schools.” Zeleny offered up for his readers’ revulsion “a series of never-before-published letters from Biden” in which “the strength of his opposition to busing comes into sharper focus, particularly how he followed the lead of — and sought support from — some of the Senate’s most fervent segregationists.”

Another of Biden’s lifelong passions, which he is now pretending never existed, is his support of tough anti-crime legislation. This found expression in the 1994 crime bill, which, as chairman of the Senate Judiciary Committee, Biden largely wrote and shepherded through the legislative process. As the 2020 candidate, he has done a total about face and now claims to favor legislation that would likely free violent criminals serving time.

But as luck would have it, another historical record has emerged that shows how deeply committed Biden was to protecting his family and yours from the “predators on our street.” A partial transcript appears after the video.

Unless we do something about that cadre of young people — tens of thousands of them — born out of wedlock, without parents, without supervision, without any structure, without any conscience developing because they literally … have not been “socialized.”… We should focus on them now, not out of a liberal instinct for love, brother, and humanity — although I think that’s a good instinct — but for simple pragmatic reasons. If we don’t, they will — or a portion of them will — become the predators fifteen years from now. … We have predators on our street that society in part because of its neglect created. … [I]t does not mean because we created them that we somehow forgive them or do not take them out of society to protect my family and yours from them.

Biden isn’t the only former two-time Democratic loser in a bid for the White House to express views on what we as Americans need to do to keep our streets safe. Note the similarities in the following video, a brief transcript of which follows.

They are often the kinds of kids called super predators — no conscience, no empathy. We can talk about why they ended up that way, but first we have to bring them to heel.

The twilight of great American cities is here. Can we stop it?
Next Post
Cartoon of the Day: Funding chaos 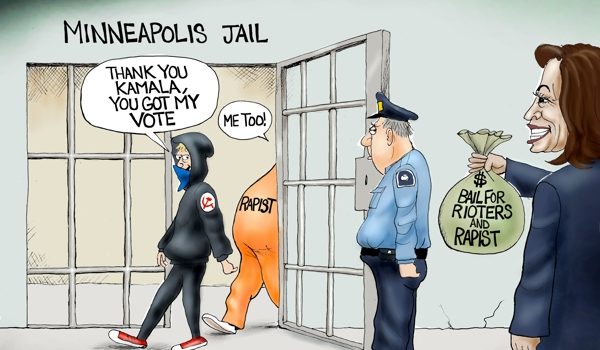