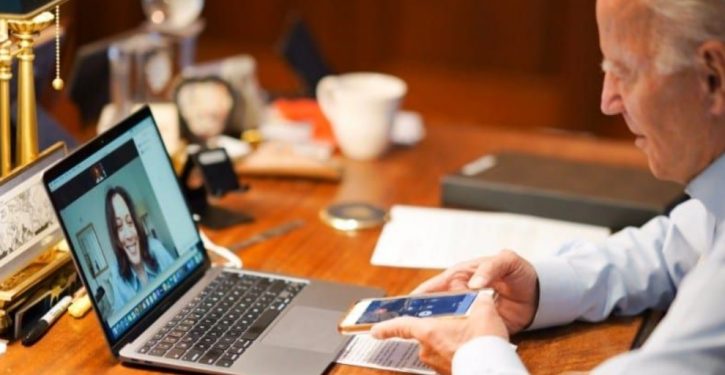 Phone calls can be tricky if you’re Joe Biden. With all he has on his plate and on his mind these days, it would be easy for him to forget why he is calling Sen. Kamala Harris. He might lose sight of his actual purpose and ask for her hand in marriage. That doesn’t seem to be beyond the realm of possibility coming from a man who introduced himself in a virtual rally in July as “Joe Biden’s husband, Joe Biden.”

So to make sure the cognitively challenged septuagenarian stayed on script during the call, his handlers evidently typed out what he needed to say.

That’s the inference many have drawn from photos of the big moment that, strangely, were made public.

The most prominent of these photos appears above. It shows Harris on the screen of a laptop, presumably in the midst of a Skype call from Biden. Beneath his phone is a sheet of paper that has been revealed, via photo enlargement, to be the script of Biden’s invitation to the senator:

A more detailed enlargement enabled by our friend Jeryl Bier is accompanied by a partial transcription of the words on the page:

>@JoeBiden leaves nothing to chance in call to @KamalaHarris to ask her to be his VP: "I'm calling you today…" "…decided I would like you…" "…effort to win back the…" "…be our nation's next…" "…you are entitled to know why I chose you. There are three reasons" https://t.co/bMb8abYj8r pic.twitter.com/pQW0hztyuT

Speculation has been running rampant for some time that the former vice president is suffering from Alzheimer’s disease. This has been supported by a host of verbal slips and memory lapses chronicled not only by conservatives but by the mainstream media back in early March when they were attempting to sabotage his campaign in favor of one of the more radical Democrats running for the nomination.

Amid violence and unrest, can Trump win with promise to restore safety and order?
Next Post
Who opposes defunding the NYPD? These black lawmakers