Last week, the president raised the possibility of delaying the presidential election amid the COVID panedmic, a suggestion that was met with the usual histrionics from the Left. Every Democrat from Joe Biden on down wailed that Trump was trying to steal the election as he done in 2016. Why even suggest such a ridiculous alternative, they demanded to know, when they had already engineered a workable and foolproof alternative to voting in person? The only problem with the Democrats’ unanimous embrace of voting by mail is that you don’t have to go back too many years to find the same players bemoaning the many pitfalls of mail-in ballots. (RELATED: CBS News runs mail-in voting experiment that goes horribly wrong)

The stand-off has led one legal expert to attempt to scare Republicans into submission. Harvard Law School professor and frequent MSNBC guest Laurence Tribe admonished Republicans on Friday’s edition of “The ReidOut” that if the winner of the election was not determined by Jan. 20, 2021, House Speaker Nancy Pelosi, third in line for the presidency, would assume the office.

They’re trying to make it look chaotic, but there is a fail-safe mechanism built into the Constitution itself. And that is no matter how much dust [Trump] throws into the gears, at high noon on Jan. 20, 2021, if there has not been a new president elected, at that point, Nancy Pelosi, speaker of the House, becomes president of the United States.

An unlikely source has called shenanigans on Tribe’s threat. The usually reliably left “fact-checker” Snopes assesses Tribe’s claim “unproven.” Snopes’s ruling does not mention Tribe by name — that would be ceding too much ground to the Right — but it does give his opinion the lowest rating anyone on the Left can get.

Biden prison plan would give states monetary incentives to release violent criminals
Next Post
Cartoon of the Day: Pandora’s Box 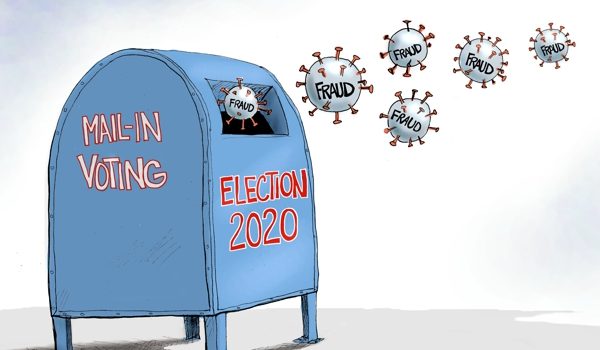