How clueless are so-called “progressives”? New York City Mayor Bill de Blasio unwittingly answered that question on CNN yesterday. At the end of his interview with anchor Wolf Blitzer he was asked:

Wolf, that’s an important message. The people of the city believe black lives matter. We wanted to send that message to our whole city and our nation. And in fact here was an opportunity for the president of the United States to show respect for that’s what we value here. And what did he do? He literally wrote [that] writing “Black Lives Matter” on Fifth Avenue would “denigrate the luxury of that avenue.” That is pure racism. That is acting like an acknowledgement of the value of black people is somehow belittling, when, in fact, what we’re trying to do is lift up people who have built the city and built America and haven’t been given their respect. It can’t just be words, Wolf, it has to be actions. [Emphasis added]

It goes on in this vein for another hundred words or so that touch on all the familiar buzz words of the day — original sin, institutional racism, respect — but there is enough here to give the gist of De Blasio’s answer. As for answer itself, it was a lie. Black Lives Matter is a self-described Marxist organization whose goal is not equality for black people but black dominance. And this choice of this location was intended as a finger in the eye of the president and all Americans who refuse to toe the Democratic line.

But the highlighted words are ultimately the most revealing. In the world inhabited by de Blasio and his ilk, painting some vapid slogan on a public street is not “just words” but “action.” On the contrary, it is literally nothing but words. It will not erase the traumatic memory of the 6-year-old child who saw her father shot to death as he and she held hands while crossing a Bronx street. Worse yet, it won’t prevent future crimes like this from occurring, now that de Blasio has disbanded the NYPD’s plain clothes unit and is slashing $1 billion for the department’s budget.

During the interview, de Blasio made no effort to hide his hypocrisy on a related issue, telling Blitzer than he through August he will ban all large gatherings in the city except for Black Lives Matter protests.

Wolf Blitzer follows up by asking about the U.S. Open. pic.twitter.com/KGsnAdXDhK 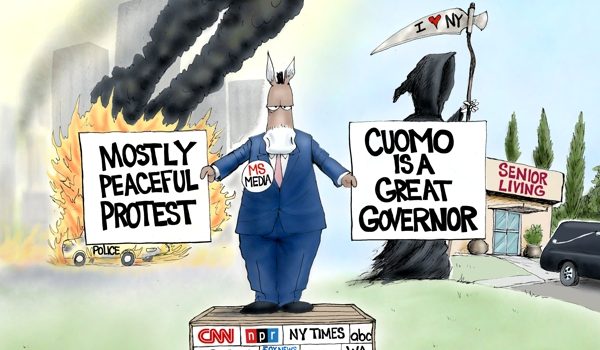