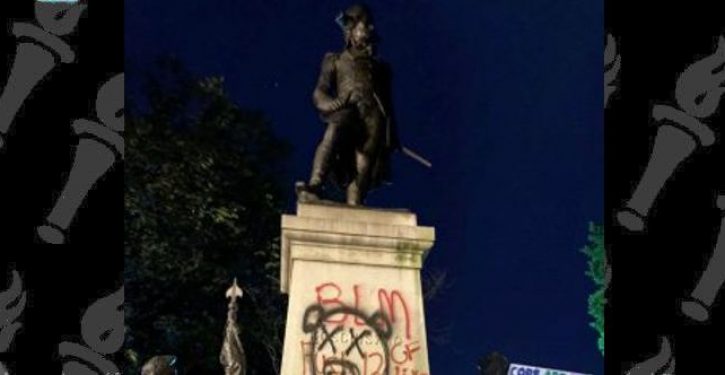 Increasingly, BLM protesters armed with spray paint and rope are defacing or toppling statues of people who made America a more just and equal place. One of the victims of their campaign to rid the landscape of “racists” (read “dead white men”) is Revolutionary war hero Tadeusz Kościuszko, who came from Poland to fight for America’s independence. His will dedicated all his assets to buy the freedom and education of African-American slaves. Yet his statue in Washington, D.C. was vandalized. “F*ck You” and “BLM” were spray-painted on the pedestal. “The statue was also spat and urinated on,” says RMF FM radio correspondent Paweł Żuchowski, who shared a video of the statue’s desecration.

Kościuszko served as a colonel in the Continental Army during the Revolutionary War. He played a key role in winning the Battle of Saratoga, earning a promotion to brigadier general. He was also an excellent architect who designed and supervised construction of modern fortifications, such as at West Point. His statue in Washington was unveiled in 1910.

Poland’s Ambassador to the U.S., Piotr Wilczek, expressed outrage at this vandalism. He tweeted, “I am disgusted and appalled by the acts of vandalism committed against the statue of Thaddeus Kościuszko in DC, a hero who fought for the independence of both the US and Poland. I implore @WhiteHouse & @NatlParkService to quickly restore the statue to its original state.”

Other statues of sympathetic figures have been vandalized, too. As Elijah Schaffer notes, “BLM protestors vandalized a statue of John Greenleaf,” a “prominent Quaker abolitionist known for his anti-slavery writings.” His statute in Whittier, California, is now spray-painted with the words “F*ck Slave Owner” and “BLM.”

Admiral Farragut led the Union fleet at the Battle of Mobile Bay. Farragut’s home state of Tennessee seceded and joined the rebellion, but he remained loyal to the Union. He fought to save his country from destruction and ensured that Americans held in bondage would become free. His reward was to have protesters spray-paint “f*ck” and “put MLK here” on his statue.

In Philadelphia, protesters defaced the statue of Matthias Baldwin, a white abolitionist who fought against slavery three decades before it ended. As the Post Millennial notes, they spray-painted “the words ‘murderer’ and ‘colonizer’ near his name despite the fact that he fought against slavery, fought for black voting rights, and even helped build schools for black children.”

The Victims of Communism memorial was also vandalized by activists who spray-painted “BLM” on it. It memorializes the hundred million people butchered by Communist regimes in the twentieth century.

Many protests exuded bigotry. French “anti-racism” protesters decrying the killing of George Floyd chanted anti-Semitic slogans such as “dirty Jews.” The European Jewish Congress called on protest organizers to stop antisemitism from spreading “within their ranks.” Its president said, “The people who claim to march against hate and racism while shouting violent antisemitic statements are hypocrites.”

The Jerusalem Post reports that “protesters also vandalized and damaged Congregation Beth Ahabah, a more than 200-year-old Reform congregation in Richmond, Virginia.” The Times of Israel reports that “synagogues, schools and Jewish memorials” in Los Angeles were “vandalized with anti-Semitic, anti-Israel slogans” and “Jewish-owned businesses” were looted.

Joy Pullman theorizes that some of the vandalism is due to historical ignorance: Protesters who know next to nothing about America’s history view historical statues as simply racism to be expunged indiscriminately.

She says that “these mob actions are not the result of accidental ignorance, but of cultivated prejudice.” Many young people have been taught little about America’s history, primarily the negative aspects, such as slavery (which existed in most of the world back when it existed in the U.S. — and still exists in a few countries, today). They know little about our Constitution or how it and America’s democratic institutions have served as a valuable model for many other countries in creating their own democracies.

As a result, “4 in 10 Americans who are younger than 39 disagree that the United States ‘has a history we should be proud of,'” according to a 2019 poll. They know little about the Constitution that secured their rights and shaped their society. For example, a 2019 poll found that “more than 80 percent of Americans ages 39 and younger could not say what rights the First Amendment protects, and three-quarters or more couldn’t name any authors of The Federalist Papers.” Another 2019 poll found “just 57 percent of millennials believe the Declaration of Independence ‘better guarantees freedom and equality’ than the Communist Manifesto.” 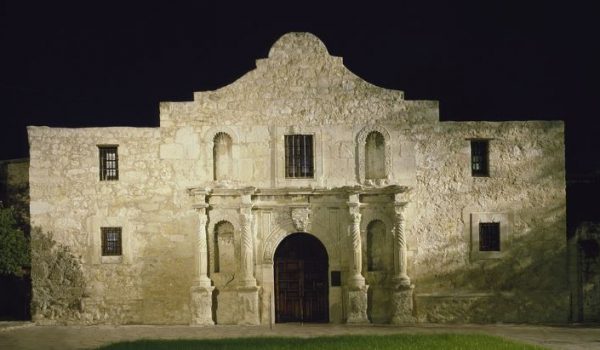 ‘Don’t mess with the Alamo’: Texas Land Commissioner George P. Bush warns protesters
Next Post
A unified theory of Spygate: The (partial) story and scope (as we know it so far)