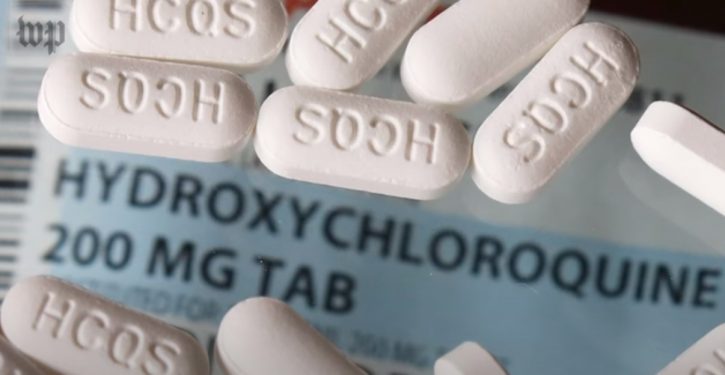 A study of hydroxychloroquine treatment outcomes that was looking increasingly bogus under inspection this past week was retracted by three of its co-authors on Thursday 4 June.  In hindsight, it ought to be amazing that it ever got published.  It certainly shouldn’t have had the power to get clinical trials suspended.  There were numerous red flags, and it was retracted without any meaningful attempt at defense 13 days after it was published online by a respected professional journal.

The pattern its little story follows most closely is that of the assaults on whatever Donald Trump is doing or saying that then boomerang back on the assailant and expose him — not Trump.  Just how little substance was behind this “study” is revealed with a bit of ordinary probing; probing that the peer review should have turned up before it was published.  There’s more than a whiff here of an urge to discredit HCQ that overrode all better instincts.  I carry no brief for HCQ, but the hysterical, foaming-at-the-the-mouth animosity toward it — especially when it has been used routinely for decades as a prophylactic treatment for malaria — is truly bizarre.

The study, “Hydroxychloroquine or chloroquine with or without a macrolide for treatment of COVID-19: a multinational registry analysis,” was published in the venerable UK medical journal The Lancet on 22 May 2020, and offered an eye-opening conclusion: that COVID-19 patients who were put on a hydroxychloroquine (HCQ) regimen were dying at a much higher rate than those who weren’t.

The problems with the study were numerous, however.  One was that it didn’t control for how sick the patients were when they were put on HCQ.  The sickest patients are the ones most likely to be treated with HCQ, in an attempt to arrest the progress of the virus by whatever means possible.  The sickest patients are also the ones most likely to die.  Patients whose symptoms are lighter are inherently less likely to die, and less in need of last-ditch intervention.  This distinction was not accounted for in the study analysis.

That seems to have been just the tip of the iceberg, however.  Another major problem, listed by everyone attempting to vet the study, was that the study sponsor, a consultancy called Surgisphere, wasn’t forthcoming with the raw data used for analysis and findings.

The study claimed a truly heroic mass of data: “the treatment and health outcomes of 96,032 patients from 671 hospitals in six continents.”  This analyst was typical, however, in judging that claim to be basically ridiculous.  Not only would such a data scope be extremely hard to obtain on the short timeline since COVID-19’s spread became a pandemic, but analyzing it was likely to be a much larger and more costly enterprise than the sponsor seemed to have the means to bring off.

Speaking of the sponsor, analysts (including yours truly) also looked into Surgisphere.  Perhaps The Lancet didn’t bother to check it out.  But Surgisphere appears to be essentially a one-man operation, the “doing business” appellation of a Dr. Sapan Desai – who is also the man behind the curtain of the websites and enterprises he alludes to, to give Surgisphere an appearance of professional accomplishment and legitimacy.  The writer at Free Range Stats has done an excellent job with a withering review of Dr. Desai’s claimed credentials, so I will let you read his work on that, and focus here on the flashing-neon alarms in Desai’s online and business trail.  (He does, at least, seem to be an actual, certified physician.)

Surgisphere lists a handful of employee names, presumably people who have agreed to be named in this manner.  But even the limited probing I am capable of performing at the Desai websites indicates that Dr. Desai is the only one who seems to interact with them.

The current Surgisphere website, which others have noted is a thinly populated layer of nothing much – and lacks history – was created on 13 March 2020, according to the page-source information at its homepage.  The author was Sapan Desai.

Surgisphere offers a log of articles on various topics that goes back to the month of April 2019.  But none of the “old” articles was loaded to the site earlier than 29 May 2020, according to the page-source information about them. Interestingly, that was when community professionals and The Lancet had just begun raising questions about the data and methods in the study, and asking Desai to answer them.

The study made reference to a software product called QuartzClinical, which harvested and organized data for its analysis.  As the blogger at Free Range Stats observes, the claims of professional awards for QuartzClinical appear to be almost entirely, um, unfounded.  Either the awards don’t exist as described, or (exceptionally inconvenient) other people or products actually won them.

The claims about awards also referred to a period before QuartzClinical appears to have existed (i.e., as far back as 2015).  It may be hard to judge exactly when QuartzClinical came into being; as noted at Free Range Stats, its website entries seemed to begin in 2019.  The site’s homepage was created on 20 July 2018, according to the page-source info.  The author: Sapan Desai.

Then there’s a “collaborative” you can pay money to join, which will give you access to and benefits from whatever is being done with QuartzClinical.  The collaborative is called Surgical Outcomes Collaborative.  Its homepage was created on 17 October 2016, by Sapan Desai.

A blog at Surgical Outcomes Collaborative, containing what Free Range Stats calls “frankly weird” entries, has its first article dated 1 September 2019, and the creation date for that article does match.  Its author is Sapan Desai.  A sample of the other articles shows Sapan Desai as the “author” (the user loading them) of each one.  There are huge clumps of articles all loaded on the dates of 10, 17, and 18 January 2020.

There is probably some way to make sense of the website creation dates.  They don’t seem to correspond to actual or claimed activity from the three business entities.  Free Range Stats has done yeoman work on demonstrating that, with the “claimed activities” category.

A tale of dead-end business registrations

The “actual activity” category doesn’t line up either.  Surgisphere purports to have been the first business entity, claiming a copyright on its website back to 2007.  A Surgisphere Corporation did register in North Carolina with Sapan Desai as its agent on 8 April 2008. (The information on this and the other entities can be accessed through this link, with links for the various entries to each secretary of state website and its relevant files.)

Weirdly, Desai’s application for incorporation, the first filing posted at the North Carolina Secretary of State website, with the date of 8 April 2008, was signed by him with a date of 1 March 2007.

The first annual report of the Surgisphere Corporation in North Carolina, filed on 12 May 2008, covered the year 2007; i.e., before it was incorporated in North Carolina.  The other strange thing about this document is that it lists a Secretary of State ID number (SOSID) of 8701531.

However, the original registration dated 8 April 2008 assigns Surgisphere Corporation the SOSID of 1037229.  Indeed, that’s how the Secretary of State annotated the first annual report filing to certify receipt.  So the SOSIDs don’t match up on that document.  (The N.C. SOS has no record, active or archived, of any business entity with the SOSID 8701531.  Frankly, it looks like it was just made up for some reason.)

Subsequent Surgisphere filings were made using the correct SOSID.  Desai made annual reports each year through 2012, but then stopped making them.  The N.C. Secretary of State issued a warning in July 2015 and admin-dissolved the business entity in September 2015.

At that point, however, Dr. Desai had already moved on to an incorporation in Texas.  He registered a Surgisphere Corporation with an address in Houston on 28 June 2012.  On 29 January 2016, the Texas Secretary of State dissolved the company due to non-payment of taxes.

In both cases, Desai used residential street addresses to register the businesses.  He used the same North Carolina address to register a non-profit called American Foundation for the Advancement of Science and Technology on 17 May 2011.  This entity doesn’t have an apparent tether to the other Desai enterprises, but is still active with the N.C. SOS, and may (my speculation) be used to handle the financial aspects of Surgical Outcomes Collaborative.

If Surgical Outcomes Collaborative is an incorporated entity in its own right, it is not apparent in an online search.  It does, however, solicit fee-paying clients, so it would require a registered money-handling agent.

A fake lever big enough to move the world

Sapan Desai’s collection of websites and claims looks like a dubious little digital empire, all smoke and mirrors.  It’s not clear how scientists like the HCQ study’s co-authors bought into (apparently) working with Desai’s “data.”  In their retraction, published by The Lancet at the link above, they acknowledge that when they pressed for Desai’s raw data, after the critiques and questions started pouring in, they couldn’t pry it out of him either.  (The Free Range Stats blogger thinks Desai just made the data up.)

It looks, shall we say, awful darn particular that the extant Surgisphere website’s homepage was created on 13 March 2020, two days after the World Health Organization announced it was characterizing COVID-19’s spread as a pandemic.

"We have therefore made the assessment that #COVID19 can be characterized as a pandemic"-@DrTedros #coronavirus pic.twitter.com/JqdsM2051A

The WHO announced on 25 May 2020, after The Lancet Published the HCQ study, that it was pausing its clinical trials of HCQ.

Four days later, the Surgisphere website was given a sudden infusion of professional article entries “dating” back to April 2019.

Meanwhile, French drug-maker Sanofi suspended recruitment for a large-scale HCQ trial, and an Australian trial was paused for review.  Whatever Sapan Desai’s deal is, the effect of his “study,” joined in by seemingly accredited scientists and published by The Lancet, was to get actual, real-world studies halted.

The arresting timing of these events is just one odd aspect of the HCQ study saga.  The public can be pardoned for a level of disgust at the political use such forms of “evidence” are put to, only to be exposed later as indefensible, at the very least; fraudulent, at worst.

The study co-authors issued this apology at The Lancet:

We all entered this collaboration to contribute in good faith and at a time of great need during the COVID-19 pandemic. We deeply apologise to you, the editors, and the journal readership for any embarrassment or inconvenience that this may have caused.

BREAKING: Michigan Supreme Court rules 7-0 in favor of barber hounded by Gov. Whitmer
Next Post
Riots: In the real world, Trump administration measures seem to be paying off