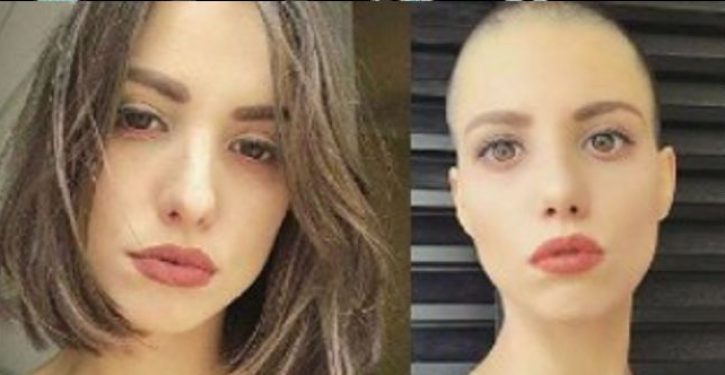 A new trend under the hashtag #gobaldforBLM has sprung up. (Image via Twitter)

To say that Black Lives Matters has a checkered history is something of an understatement. The group, loosely formed after the death of Trayvon Martin in 2012, began as a hashtag on social media. It has since grown into a global network with its own mission statement that ascribes its need to exist to “state-sanctioned violence and anti-Black racism.”

Calling the actions by law enforcement that have led to the death of several dozen black men “state-sanctioned violence” is a pretty big reach, but I suspect that many of the people now carrying the Black Lives Matters signs to protests marches have never been to the organization’s website.

They are ostensibly also unaware of various positions that the black community has taken under the name of Black Lives Matters. In 2017, Yusra Khogali, a co-founder of Black Lives Matter Toronto, penned a Facebook post that argued that white people are “sub-humxn” [sic] and asked Allah to give her the “strength to … kill these men and white folks.”

That same year, Chanelle Helm, an organizer of Black Lives Matter Louisville, published a list of requests for white people. Among these was:

If you’re inheriting property you intend to sell upon acceptance, give it to a black or brown family.

In and of itself the request was not unreasonable. But then the bullet point went on to chide the prospective donor by adding, “You’re bound to make that money in some other white privileged way.”

It is hardly surprising in this light that a Harvard-Harris survery conducted in 2017 found that 57% of Americans have a negative view of Black Lives Matter.

How then did we as a nation go from a realistic assessment of this militant group to adoration in the space of ten days? Under the headline “A ‘Glorious Poetic Rage,’” the New York Times examines the same question:

“Seven years ago, we were treated like we were too radical, too out of the bounds of what is possible,” said Alicia Garza, the civil rights organizer based in Oakland, Calif., who coined the phrase in a 2013 Facebook post after George Zimmerman was acquitted of killing 17-year-old Trayvon Martin. “And now, countless lives later, it’s finally seen as relevant.”

But that’s not the half of it. Non-black Americans are now bowing down — literally — to show their respect for, if not subservience to — Black Lives Matter. Among those who have taken a knee in front of their BLM masters are Michigan Gov. Gretchen Whitmer took a knee and Democratic nominee Joe Biden. Nearly a thousand people in Bethesda, Md. risked becoming sick from COVID-19 to sit close together and take an oath of allegiance to BLM. Members of the National Guard, dispatched to Atlanta to control eruptions of violence, danced to the macarena along with their new master.

Countdown to curfew in Atlanta pic.twitter.com/vvITsNMSdB

Harris vs. Demings: Putting VP contenders to the ‘Kaine test’
Next Post
Jumping to conclusions about police killings