To paraphrase the song title, when you’re liberal, the whole world is in hate.

At a news conference this morning, New York City Mayor Bill de Blasio told reporters about a video he had seen in which one of New York’s Finest drew his gun on protesters Sunday evening.

“That to me, seeing that video was absolutely unacceptable,” the mayor opined, according to the New York Post, adding:

I want you to note on that video, a superior officer immediately came over and move that officer away from that crowd, that officer should have his gun and badge taken away today.

A source shared this video, which he says he took at around 10 pm near near 12th and Broadway. It appears to show an NYPD officer pointing a gun at protesters outside the Strand pic.twitter.com/pCTNIYL7op

It’s no secret that de Blasio has had his share of run-ins with the city’s police force during his two terms as mayor. After he accused the department of wholesale racism in 2014, the Patrolmen’s Benevolent Association urged its members to sign a “Don’t Insult My Sacrifice” waiver, instructing the mayor to keep away from their funerals in the event they were killed in the line of duty. Three years later after an officer who was mother of three was fatally shot in the head by a black assassin as she sat in her patrol car, de Blasio did have the temerity to show up at her funeral. The members of the force in attendance turned their backs on him. (RELATED: Bill de Blasio’s daughter arrested at Manhattan protest)

The current situation might seem less outrageous until you read the final sentence of the Post article: “The mayor added that he didn’t know all the facts around the Sunday incident and said there will be an investigation.” 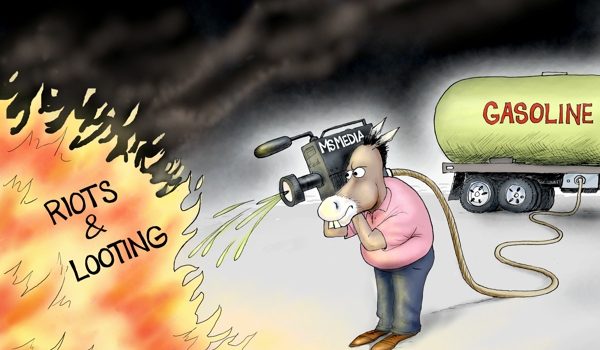 Cartoon of the Day: Flame throwers
Next Post
Biden says Charlamagne Tha God was ‘baiting him.’ Let’s go to the videotape