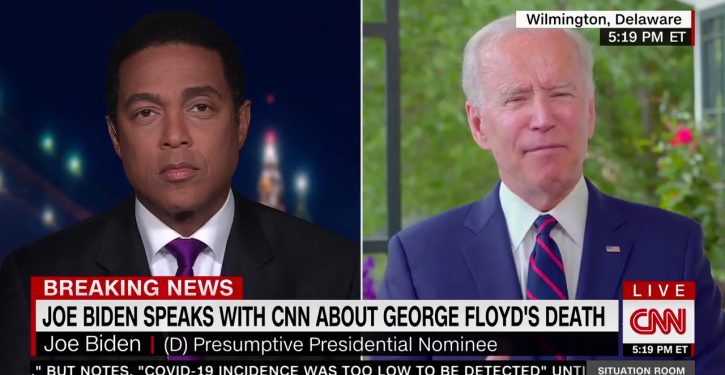 Presumptive Democratic nominee Joe Biden has on the defensive ever since he made his infamous “You ain’t black” comment to radio host Charlamagne Tha God last week.

His latest challenger was CNN’s Don Lemon, who interviewed the former vice president on Monday and asked this:

[About] that comment that you made … that appears to take black voters for granted: In light of these horrible events of the last week, it’s important for black voters to know which leader are you going to be?

Right off the bat that would seem like a loaded question in light of Biden’s indefensible history with black Americans. Among the questions that linger is how Biden, who claims to be a champion of all causes black, explains his cozy one-time relationships with segregationists in the Senate. Or whether he still feels the way he did in 1975, when he said that desegregation would prevent blacks from “embracing their own identity.”

But Lemon didn’t get into any of that, asking him instead to explain how black voters could now trust him. In his answer, which you can watch below, Biden claims for the first time that the radio host was “baiting” him.

It is instructive, therefore, to go back to the interview with Charlamagne Tha God and see exactly what the host said that Biden considers “baiting.” The key portion of the dialogue begins at 1:33. The transcript follows:

Charlamagne Tha God: You gotta come see us when you come to New York, VP Biden. It’s a long way to November. We’ve got more questions.

Joe Biden: You’ve got more questions? Well, I tell you what: If you have a problem figuring out whether you’re for me or Trump, then you ain’t black.

That’s it? That’s what Biden considers baiting? All the host said is that he has more questions before he’s willing to throw his support behind the septuagenarian. That’s not substantially different from the challenge he faced from Don Lemon. (RELATED: Black Americans are in an abusive relationship with the Democratic party)

If Biden considers having to answer questions about his qualifications from his “friends” to be baiting, he is going to have a long, difficult campaign season.