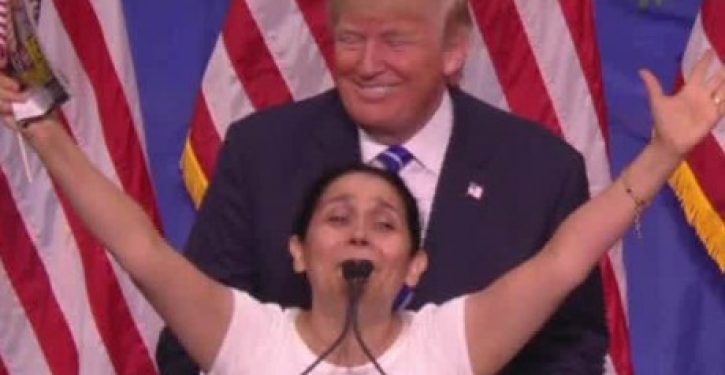 From the title of the piece you might get the wrong impression. You might suppose that its author, Tom Nichols, has been drinking from the same fountain as Joe Biden, who during a heated exchange in 2019 challenged an Iowa voter to a push-up contest and once claimed he would have “beat the hell out” of Trump for disrespecting women(!) if he had known him in high school.

But Nichols makes it plain in the first two paragraphs that he is savvy to the difference between toxic masculinity and the Left’s new idea of manliness, even if Biden isn’t. And Trump, by his lights, ain’t manly.

Not that you should misconstrue the reason Nichols has committed 3,200 words to a treatise on Trump’s masculinity. He comes not to bury Trump (though he devotes the opening paragraph to the president’s dishonesty and low IQ) but rather to share a conundrum he has wrestled with:

… [S]ince his first day as a presidential candidate, I have been baffled by one mystery in particular: Why do working-class white men — the most reliable component of Donald Trump’s base — support someone who is, by their own standards, the least masculine man ever to hold the modern presidency? … [T]he question is why so many of Trump’s working-class white male voters refuse to hold Trump to their own standards of masculinity — why they support a man who behaves more like a little boy.

He proceeds to ask — and answer, in the negative naturally — questions about whether Trump measures up to such masculine traits as honor, courage, a willingness to own responsibility, and respect for women. I wasn’t aware that those virtues were the exclusive domain of men, but no matter. The bottom line, at least for Tom Nichols, is that Trump is a coward, a crook, a womanizer, and more.

The irony of writing  — and in The Atlantic’s case, publishing  — a hit job so nakedly biased as this one at this point in time is as inescapable as it is rich. The man hoping to defeat Trump in November’s championship matchup fails every one of Nichols’s masculinity tests. As vice president, Joe Biden abused his office to enrich his family and himself and, Tara Reade’s claims aside, behaves toward women in a manner that one of his victims has described as “cringeworthy.” One even has to wonder whether a timid little boy lurks just beneath Biden’s constant and tiresome shows of machismo.

In fact, since Nichols’s claim is that Trump is the most unmanly president, I defy him to point to one Democratic president who was more manly. Putting aside the obvious jokes about mom jeans and throwing like a girl, would Nichols give Barack Obama a pass for his behavior in the aftermath of the Benghazi raid? Or Bill Clinton for his affair with Monica Lewinsky among others?

Donald Trump is hardly a perfect human specimen. But he won the support of the electorate in 2016, including white working men, because they viewed him as the best antidote to eight grueling years of Barack Obama’s quasi-socialist policies. I suspect the same people will make the same decision in 2020 despite the efforts of hacks like Nichols to shame them into doing otherwise.

Cuomo: ‘We all failed’ at making coronavirus projections
Next Post
Quote of the Day: ‘We are about to see best economic data we’ve seen in history of the country’