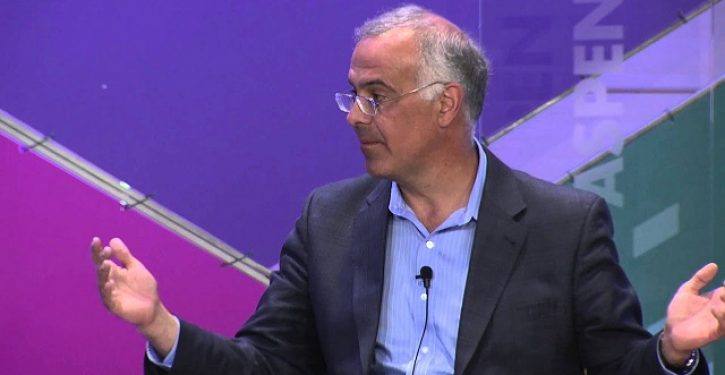 It’s hard to know whether the rumor that the New York Times pays its columnist by the Trump insult holds any validity, but I wouldn’t be surprised to learn that it does. Such a policy, if it existed, would be hell on the paper’s resident lone “conservative,” David Brooks. Yet a column he cranked out on Thursday reveals he is up to the challenge.

The subject of Brooks’s op ed isn’t immediately clear from either the title — “Trump Has Made Us All Stupid” — or the lede:

Donald Trump is impulse-driven, ignorant, narcissistic and intellectually dishonest. So you’d think that those of us in the anti-Trump camp would go out of our way to show we’re not like him — that we are judicious, informed, mature and reasonable.

But the events of the past week have shown that the anti-Trump echo chamber is becoming a mirror image of Trump himself — overwrought, uncalibrated and incapable of having an intelligent conversation about any complex policy problem.

It’s rather fascinating that Brooks believes that “the anti-Trump echo chamber” is only now becoming “overwrought, uncalibrated and incapable of having an intelligent conversation,” but that’s grist for another post. The purpose of this post is to get to Brooks’s thesis, which he begins exposing in paragraph three:

For example, there’s a complex policy problem at the heart of this week’s Iran episode. Iran is not powerful because it has a strong economy or military. It is powerful because it sponsors militias across the Middle East, destabilizing regimes and spreading genocide and sectarian cleansing. Over the past few years those militias, orchestrated by Qassim Suleimani, have felt free to operate more in the open with greater destructive effect.

We’re not going to go in and destroy the militias. So how can we keep them in check so they don’t destabilize the region? That’s the hard problem — one that stymied past administrations.

In the Middle East, and wherever there are protracted conflicts, nations have a way to address this problem. They use violence as a form of communication. A nation trying to maintain order will assassinate a terrorism leader or destroy a terrorism facility. The attack says: “Hey, we know we’re in a long-term conflict, but let’s not let it get out of hand. That’s not in either of our interests.”

The attack is a way to seize control of the escalation process and set a boundary marker.

In brief, Brooks wants his readers to know that he thinks Donald Trump did good by taking out Soleimani. He also think the anti-Trump echo chamber “led by Bernie Sanders and Elizabeth Warren” was wrong in its knee-jerk reaction that “we’re on the brink of war! Trump is leading us to more endless wars in the Middle East!”

In fairness, Brooks does enlarge on his point, acknowledging:

This is Trump’s ultimate victory. Every argument on every topic is now all about him. Hating Trump together has become the ultimate bonding, attention-grabbing and profit-maximization mechanism for those of us in anti-Trump world.

I’m just not sure why he couldn’t say that without dumping on the president first.

Senate Dems won’t support measure praising U.S. military for Soleimani killing
Next Post
Ocasio-Cortez complains about being so popular she ‘can’t even go outside’