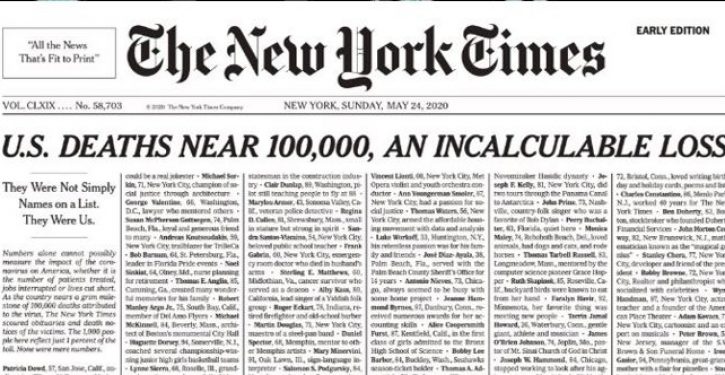 There’s no ignoring the fact that the death toll from COVID-19 is tragic. Mass loss of life always is regardless of whether it is from war, pestilence, or genocide.

But when the New York Times took it upon itself on Sunday to publish a list of names of Americans who had died of the virus, something seemed off. First, the Times published only 1,000 names under the banner headline that grimly noted that “U.S. Deaths Near 100,000, an Incalculable Loss.” If you’re going to name names, why not go whole hog and devote as many broadsheet pages and editions as it takes to list all names?

Second, the list was compiled by sifting through online obituaries, as the Times admits. A subhead on the front page advises, “They were not simply names on a list,” but that is precisely what they were.

Finally, if it’s the New York Times, you can bet there’s a narrative or agenda lurking just beneath the surface. When the number of deaths from the coronavirus surpassed the number of American troops who died in the Vietnam War, the Times was right there to report it, along with every major news outlet, as though it meant something. And the something was that somehow the deaths were Donald Trump’s responsibility. Almost everything these days is, according to the Left.

But the Times is guilty of more than just a fool’s errand. It is also guilty of fake news. As the Daily Caller notes:

One purported victim, 27-year-old Jordan Driver Haynes of Cedar Rapids, Iowa, was described by the Times as a “generous young man with a delightful grin.” The outlet quoted the phrase directly from Haynes’ obituary. 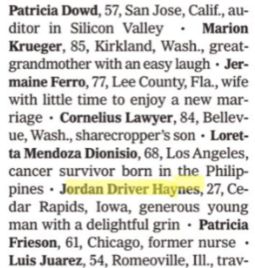 But if the team had spent the time developing genuine profiles of the victims and not just searched for the keyword COVID-19 in obits, it might have come upon this: 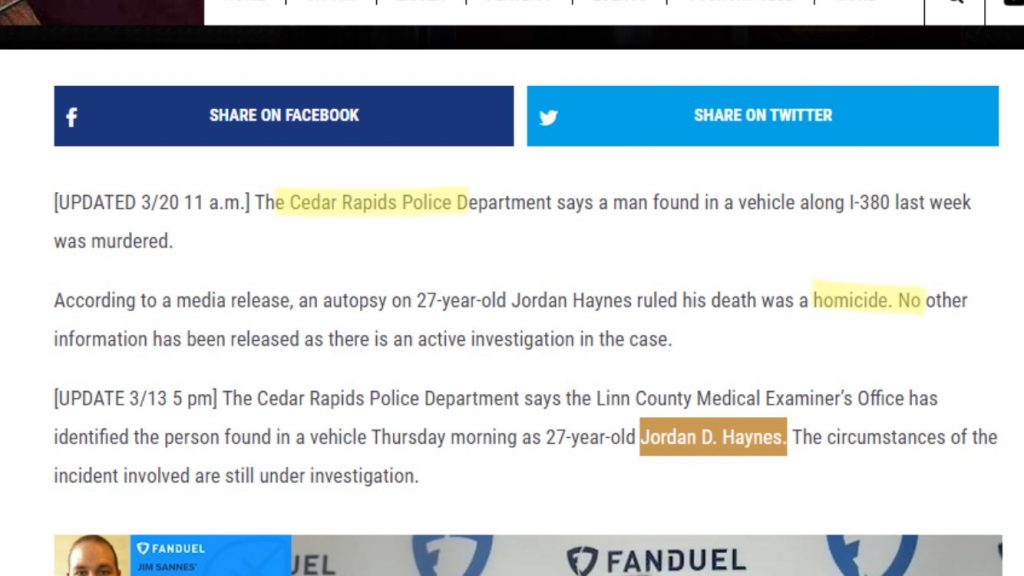 The red herring in this instance was mention in the death notice that private services were being held “due to the COVID-19 pandemic.”

The Times has since published a correction on Twitter, noting that “at least one name [is] in error,” but maybe next time the paper should just keep its claws hidden.

Correction: Earlier editions of Sunday's front page included at least one name in error. Our original tweet containing an image of that front page has been deleted and replaced with an image of the late edition.