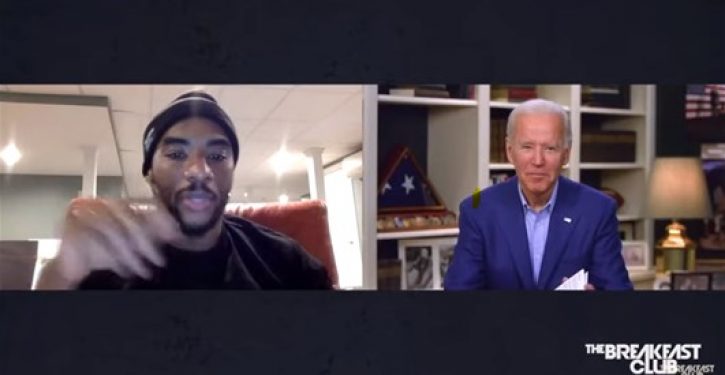 We’ve been there before. In 2012, while campaigning to become vice president, then-Sen. Joe Biden appeared in a widely disseminated campaign photo clasping hands with Democratic Sen. Robert Byrd, who — as Politifact has since pointed out — wasn’t a Grand Wizard of the Ku Klux Klan. Rather he was once just the leader of a local chapter, which I supposed to be much better.

Biden did it again in 2012. This time while campaigning for reelection, he warned a roomful of blacks that voting for Republican nominee Mitt Romney would “put y’all back in chains.” Scoffers be warned: That account has the Snopes seal of approval. And again, in 2019: In recalling the the “civility” of the Senate in the 1970s and 1980s he invoked the names of two Southern segregationists he had worked alongside. That story was reported by the New York Times.

Yesterday was of course Biden’s latest. When urged by “Breakfast Club” host Charlamagne tha God to come to New York for a more extensive interview, adding, “We’ve got more questions,” Biden replied, “You’ve got more questions? Well, I tell you what: If you have a problem figuring out whether you’re for me or Trump, then you ain’t black.” The money portion of the exchange begins at 1:33.

Vice President Biden’s statement today represents the arrogant and out-of-touch attitude of a paternalistic white candidate who has the audacity to tell Black people, the descendants of slaves, that they are not Black unless they vote for him. This proves unequivocally that the Democratic nominee believes that Black people owe him their vote without question; even though, we as Black people know it is exactly the opposite. He should spend the rest of his campaign apologizing to every Black person he meets.

1.3 million black Americans already voted for Trump in 2016. This morning, Joe Biden told every single one of us we “ain’t black.” I’d say I’m surprised, but it’s sadly par for the course for Democrats to take the black community for granted and brow beat those that don’t agree.

Perhaps no one had a more compelling response to the remark than Fox News’s own Harris Faulkner, who said:

I’ve been fighting against this notion that you’re not black enough unless you think a certain way, or you vote a certain way, you speak a certain way, you do certain things. My whole life, I grew up military, pretty much neutral along the zone of can we all just get along no matter what we look like. I have biracial daughters. This is more than just a little offensive; it is shortsighted; it is a blind spot for this former vice president. He should’ve gotten up immediately on whatever venue or microphone he had. I would’ve said it for him immediately right there on ‘The Breakfast Club.’ And say, ‘you know what, let me restate that.’

Perhaps not surprisingly, prominent black groups chose not to weigh in. So far, neither the NAACP nor the Congressional Black Caucus has issued a statement.

Whether they will is a moot point. Whether this blunder costs Joe Biden a single vote, it is not the last of its kind we will hear from him.

AUDIO: J.E. Dyer talks Flynn unmasking, more on Howie Carr Show
Next Post
Did you know there is a difference between being ‘politically black’ and ‘racially black’?